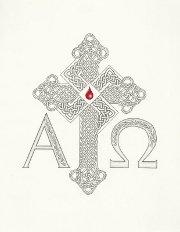 Every Friday night at 8:PM Eastern. Hear Christian Identity explained from Scripture like you have never heard it before! Listen on Talkshoe or here on Christogenea streaming radio.

1 And it came to pass on one of the days of His teaching the people in the temple and announcing the good message, there appeared the high priests and the scribes with the elders 2 and they spoke, saying to Him “Tell us, by what sort of authority do You do these things? Or who is it who has given to You that authority?”

The Codices Alexandrinus (A), Washingtonensis (W) and the Majority Text have merely priests, rather than high priests. The text follows the Codices Sinaiticus (>א), Vaticanus (B), Ephraemi Syri (C) and Bezae (D).

3 But replying He said to them “I also shall ask you a question, and you must tell Me:

The word λόγος (3056) is rendered as question here, but it most literally means a word.

4 The immersion of Iohannes, was it from of heaven or from of men?”

The Pharisees had not gone to John because they thought of being baptized by him. They really went to see what he was doing, and why he thought he had such license to baptize. In Luke chapter 7, after Christ explains to the people that John was indeed a prophet, we see these words: “29 And all the people heard, and the tax-collectors deemed Yahweh just, being immersed in the immersion of Iohannes. 30 But the Pharisees and the lawyers rejected the counsel of Yahweh in regard to themselves, not being immersed by him.” Here Christ challenges them concerning this, which is also recorded in Matthew chapter 21and Mark chapter 11. From here we can also see that it is not improper to answer a question with a question in return, a rhetorical device eschewed by many today.

1 Then entering in He passed through Iericho, 2 and behold, a man by name called Zakchaios, and he was chief tax-collector and he was wealthy. 3 And he sought to see Yahshua, who He is, and was not able because of the crowd, for he was small in stature. 4 Yet running ahead to the front he went up into a mulberry tree that he may see Him, since He was about to pass through there. 5 And as He came by the place, Yahshua looking up said to him: “Zakchaios! Hurry, you must come down! For today it is necessary for Me to stay at your house!” 6 Then hurrying he came down and welcomed Him rejoicing. 7 And all those seeing it murmured, saying that “With a sinful man He has entered in to lodge!” 8 Then stopping Zakchaios said to the Prince: “Behold, half of my property, Prince, I give to the poor, and if I have extorted anything of anyone, I return it fourfold!” 9 And Yahshua said to him that “Today has preservation come to this house, because he also is a son of Abraham! 10 For the Son of Man has come to seek and to save that which has been lost!”

1 Then He spoke to them a parable, in reference to the necessity for them always to pray and not to falter, 2 saying: “There was a certain judge in some city who feared not Yahweh and respected not man. 3 And there was a widow in that city and she began saying to him ‘Exact vengeance for me from my opponent.’

The verb ἄρχω (756, 757) is merely “to begin” here. Used with the Participle “saying”, it implies that the woman “began and continued”, which Liddell & Scott explain in their definition of the word at ἄρχω I., 5.

4 Yet for a time he desired it not. But afterwards he said to himself, ‘Even if I do not fear Yahweh, nor do I respect man, 5 indeed on account of this widow causing me trouble I shall avenge her, lest in result of her coming she wears me out.’”

“She wears me out” or “she annoys me greatly”, both of which are metaphorical renderings of ὑπωπιάζῃ με, which literally means “she would hit my eye”. The verb ὑπωπιάζω (5299), which appears elsewhere in the N.T. only at I Corinthians 9:27 where Paul uses it literally, is “to strike one under the eye...Passive to have a black eye...” (Liddell & Scott).

Studying the history of Christian Europe one should recognize that many from the noble classes thought that it was beneficial to have the anti-Christ jewish usurers around for the sake of commerce. Kings used these jews in the hopes of they themselves profiting from jewish vice and usury. In the meantime the jews acquired great wealth, having the business of usury and capital exclusively to themselves since Christians were barred from such practices. If Christians had only heeded the words of Christ in Luke chapter 16, they may have recognized the connection between the pursuit of wealth and the infiltration and corruption of the Kingdom of God, which has led to the very situation which we suffer today.

1 Then He said to His students: “It is impossible for scandals not to come, but woe to him through whom they come! 2 It would be better for him if a mill stone is placed around his neck and he were cast into the sea than he should be offended by the least one of these!

Two weeks ago, following the presentation of Luke chapter 15, I had given an outline of the reasons for the translation of Luke chapter 16 verses 8 and 9 as they appear in the Christogenea New Testament. Here we will summarize the explanation of the Parable of the Unrighteous Steward once more, and begin by reading the verses in question: “8 And the master praised the unrighteous steward because he did wisely, because the sons of this age are wiser than the sons of light are towards their own race. 9 And I say to you, shall you make for yourselves friends from the riches of unrighteousness, that when you should fail they may receive you into eternal dwellings?”

In summary, in verse 8 of the chapter there are two Greek words which practically all, if not all, of the popular translations of Luke fail to render properly. These are αἰών, which here is rendered as age, and γενεά, which is rendered as race. The Greek word αἰών is the word from which we have the English eon. It represents a period of time, and not of space. Therefore it cannot be properly translated as world the way in which we generally understand the word world as it is used today.

1 Then He also said to the students: “There was a certain wealthy man who had a steward, and he had suspected him of squandering his possessions. 2 And calling him he said to him ‘What is this I hear about you? Give me an account of your stewardship, for you are no longer able to be steward.’ 3 And the steward said to himself ‘What shall I do, that my master has taken the stewardship from me? I am not able to dig, and I am ashamed to beg. 4 I know what I shall do, in order that when I have been removed from the stewardship they shall receive me into their houses!’ 5 And calling on each one of those indebted to his master, he said to the first ‘How much do you owe my master?’ 6 And he said ‘A hundred baths of olive oil.’ So he said to him ‘Take your records, and quickly sitting down write fifty.’

The notes to this podcast are already contained here in papers written years ago, Divorce in the Bible and The Divorce Discourse: Luke 16:16-18

1 Then all of the tax-collectors and the wrongdoers were approaching Him to hear Him. 2 And both the Pharisees and the scribes were murmuring saying that “He receives wrongdoers and eats together with them!” 3 So He spoke to them this parable, saying: 4 “Which man from among you having a hundred sheep and losing one of them would not leave behind the ninety-nine in the wilderness and go for that which is lost until he should find it? 5 And finding it places it upon his shoulder rejoicing, 6 and coming to the house will call together friends and neighbors saying to them ‘Rejoice with me, because I found my sheep which is lost!’ 7 I say to you that thusly there shall be joy in heaven upon the repenting of one wrongdoer rather than upon ninety-nine righteous who have no need of repentance!

A lot may be said of this allegory, aside from the illustration of how valuable each and every one of the sheep are to their Shepherd, which is yet another illustration that all Israel shall indeed be saved....

The Gospel of Luke, Chapter 14 – Christogenea on Talkshoe, September 7th, 2012

1 And it happened while He entered into the house of one of the leaders of the Pharisees on the Sabbath to eat bread that they were watching Him closely.

The opponents of Christ had been watching to entrap Him since the “time if His coming forth”, as it says in Luke chapter 11, “laying in wait for Him to catch something from His mouth.”

2 Then behold, there was a certain edematous man before Him.

The word ὑδρωπικός (5203) is an adjective, “dropsical” (Liddell & Scott), an “edematous man” here. From ὕδρωψ, “dropsy” (Liddell & Scott), the word is an archaic term for edema, “an excessive accumulation of serous fluid in tissue spaces or a body cavity” (The American Heritage College Dictionary), and derived from ὕδωρ “water”.