These notes have been developed into an article for the next Saxon Messenger, with the same title: White Nationalist Cognitive Dissonance

We are going to play a tape, actually a YouTube video, of a man who is interviewing several PhDs and science students, and asking them for one observed instance of macro-evolution. While micro-evolution is often used for what may better be called the adaptation of species, macro-evolution is the actual changing of one identifiable kind, such as a cat, into another identifiable kind, such as a dog or a cow. Evolutionists play with the word species, and when it comes to macro-evolution they are challenged by the concept of kind. When they are cornered, as one PhD in the video was cornered, they  insist that by adding an unspecified but very long amount of time, macro-evolution somehow happens. But they cannot prove that it has ever actually happened, and it has never been observed to happen. Therefore macro-evolution is a religious belief, and it is at least as fantastic a belief as those of any other religion. One PhD interviewed was forced to admit that evolution in this regard is a “belief”, even though he was very reluctant to do so. Other PhDs were speechless and fumbling when challenged on macro-evolution. Textbooks and journals, which hypothetically extrapolate entire genera from the bones of certain long-dead animals, are merely promoting conjecture which does not at all amount to valid science.

The video below was played during the opening segment of the program:

This presentation is based on the essay found at Christogenea entitled Classical Records and German Origins, Part Five

The Epistles of Paul - 2 Corinthians Part 8: Communion, Not Tithes

After expounding at great length upon the affliction and the encouragement which the children of Israel have in the Gospel of Reconciliation to Yahweh their God, as well as Yahweh's plan of mercy for Israel in that reconciliation, in 2 Corinthians chapter 6 Paul illustrated the responsibility that the children of Israel have as recipients of that Gospel and that mercy. That responsibility requires the children of Israel to separate themselves from all of the sinners and from all of the unclean of the other races, and then Yahweh their God shall receive them and dwell with them. Then in 2 Corinthians chapter 7 Paul had turned to express his gratitude that the Corinthians, being grieved, had chosen to repent from the problems which Paul had addressed in his first epistle to them, and the joy which Titus had transmitted to him on account of their repentance and their abiding in Christ. Here in this eighth chapter of 2 Corinthians, Paul turns to the more worldly tasks related to the fulfillment of his ministry, which in this case include the collections he had been taking on behalf of the poor of the saints in Jerusalem.

Upon the completion of the initial year and a half which he had spent in Corinth, Paul had a brief sojourn in Ephesus. Then upon his departure from there, after promising the Ephesians that he would soon return to them, if indeed Yahweh desired it, we then see Luke record in Acts chapter 18: “22 And coming back into Caesareia, going up and greeting the assembly he went down into Antiocheia. 23 And spending some time he departed, passing through successively the land of Galatia and Phrugia, confirming all of the students.” Paul of Tarsus had written his epistle to the Galatians shortly before his actual visit there, and after he had seen the apostles in Antioch during the travels which Luke records in that passage of Acts 18. After those travels he did return to Ephesus, where he remained for three years.

Brett can be found at his own website, Expeltheparasite.com, or in his articles at the Daily Stormer.

Here William Finck presents two of Clifton Emahiser's essays introductory to Christian Identity: The Unseen World Within Our World and A Truth Hidden For 2,700 Years

This presentation is based on the essay found at Christogenea entitled Classical Records and German Origins, Part Four

The Epistles of Paul - 2 Corinthians Part 7: Touch Not the Unclean

In the latter portion of 2 Corinthians chapter 6 Paul of Tarsus had warned his readers, as it is translated in the Christogenea New Testament “14 Do not become yoked together with untrustworthy aliens; for what participation has justice and lawlessness? And what fellowship has light towards darkness? 15 And what accord has Christ with Beliar? Or what share the faithful with the faithless? 16 And what agreement has a temple of Yahweh with idols? For you are a temple of the living Yahweh; just as Yahweh has said, 'I will dwell among them, and I will walk about; and I will be their God, and they will be my people.' 17 On which account 'Come out from the midst of them and be separated,' says the Prince, and 'do not be joined to the impure, and I will admit you'. 18 'And I will be to you for a father, and you will be mine for sons and daughters, says the almighty Prince.'” With all certainty all of these statements are inter-connected and were intended to be a single admonition. Sadly, the meaning of this admonition is lost on nearly all Christians of modern times. Here Paul had quoted from Isaiah chapter 52, and he is warning his readers to come out from among certain unclean people. Not things, as the King James and other versions insist, but people. The impure, or unclean, of verse 17 are the “them” from whom Christians are to come out from among in verse 16, among whom are also the untrustworthy aliens Christians should not be joined to in verse 14! The apostle John was teaching very similarly where he in turn had warned his readers, in his second epistle, that “9 Whosoever transgresseth, and abideth not in the doctrine of Christ, hath not God. He that abideth in the doctrine of Christ, he hath both the Father and the Son. 10 If there come any unto you, and bring not this doctrine, receive him not into your house, neither bid him God speed: 11 For he that biddeth him God speed is partaker of his evil deeds.” John was not merely talking of those who profess Jesus or of those who do not profess Jesus, but more specifically of those who abide in His doctrine, or those who do not abide in His doctrine, and Yahshua Christ had constantly admonished His followers to keep His law.

This map is relative to the program: 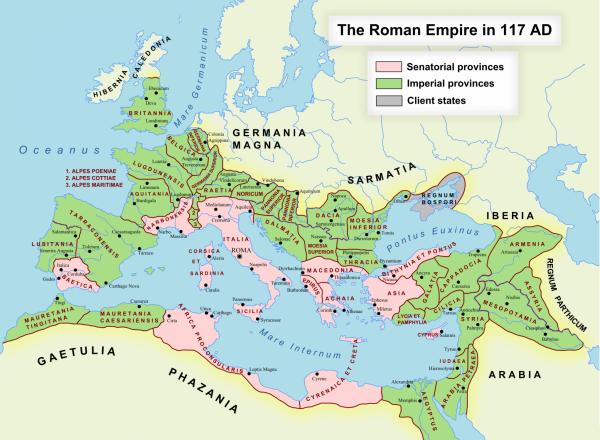 Click here for a larger version of this map.

The Epistles of Paul - 2 Corinthians Part 6: Come Out from Among Them and be Separate

In these first 5 chapters of Paul's second epistle to the Corinthians we have seen a rather expansive explanation of Yahweh God's plan for mercy and reconciliation for the children of Israel. Among Paul's first topics were affliction and comfort, and we had seen the Old Testament prophecies of Israel's affliction and comfort in their punishment and chastisement as they were alienated from God. Paul then contrasted the Old Covenant service of death in letters to the New Covenant service of the spirit in Christ. The Old Covenant letter of the law demanded of men a punishment of death for sin, whether it was the death of a sacrificial victim or of the sinner himself, depending on the nature of the sin. But the New Covenant service of the spirit is one of mercy and forgiveness for sin, which also demand the recognition of sin and repentance. We then illustrated from the Old Testament those prophecies relating to the New Covenant, and in that manner we had seen how Paul was teaching the fulfillment of those prophecies in those same children of Israel. Paul had explained that rather than the death which they had merited in the flesh under the law, that by the mercy of God in Christ men have eternal life in the spirit in spite of their sin, and all men are urged to repent on account of the revelation of the greater purpose of God which was revealed in Christ.

In 2 Corinthians chapter 5 Paul had made the assertion that since Yahweh had not excluded any of the children of Israel from His plan for mercy, men should in turn have that same mercy upon their brethren, so long as they too are repentant and willing to abide in Christ. With this we examined many of the prophecies in Isaiah, Jeremiah, Ezekiel and Daniel which all foretold of the cleansing of the sins of the children of Israel, and the completeness of that cleansing as Paul had explained it here. Because Yahweh has forgiven all of the children of Israel of all of their sins, then Christians - who are properly the children of Israel reconciled to God in Christ - should forgive one another in like manner. Doing this, Paul had also asserted that in Christ new things have come, and he cited Isaiah 43:19 where Yahweh through the prophet had said in part, according to the King James Version: “Behold, I will do a new thing”. With this we examined at length that same section of Isaiah, which concerns the alienation and eventual reconciliation of the ancient children of Israel, and, in conjunction with other prophecies, what would happen to them during their period of alienation - how Yahweh God had prophesied that they would grow into an innumerable people and become many nations and how both the prophet and Paul himself also reveal that these were the European nations of later history to whom Paul had brought the Gospel. For that very reason, towards the end of 2 Corinthians chapter 5 and his explanation of these things concerning the covenants, sin and mercy, Paul called his ministry the ministry of reconciliation, and referred to the Gospel as the word of reconciliation.