It seems that there has long been some degree of confusion in regard to the healing of a Canaanite woman’s daughter by Yahshua Christ, an event described at Matthew 15:21-28 and Mark 7:24-30, and especially among Israel Identity adherents. Why did Christ heal the daughter of a Canaanite? Was she really a Canaanite? While the descriptions of the event are often abused by the promoters of universalism, they actually refute universalism. Yet those who understand the Old Testament and the curses against the Canaanites are left to wonder just how and why Yahshua Christ had shown mercy toward this particular woman, and this issue has been the cause for much debate. This short essay shall endeavor to clear up any confusion surrounding this event.

First, it must be noted that the accounts of this event provided by Matthew and Mark differ significantly. It must be understood that no gospel account by itself can be regarded as a full and complete record of any particular event. Rather, each writer witnessed, or recorded from witnesses, all or parts of an event seen from a certain perspective, writing down those portions of the event which were notable, as they were remembered. Therefore, piecing the accounts together we can create a more complete picture of the event as a whole.

William Finck and Sword Brethren present and discuss two speeches by Joseph Goebbels, Our Hitler (1933) and The New Year (1934). The example which Hitler made, which Goebbels illustrated, and some of the things which Identity Christians should learn from them and from National Socialist history in general.

William Finck and Clifton Emahiser present and discuss Clifton's paper, The Insane Doctrine of Personal Salvation, Part 1, among other things

Don Elmore and Mark Downey discuss the state of the Christian Identity church (in the sense of the ecclesia) today. Pastor Elmore had some problems with his phone, and regrettably was not able to continue through the entire program.

This is a backup recording which I made from our streaming computer in Virginia, while we are away in Florida. Therefore there is some interference (Talkshoe notifications and such) which was beyond our control. This recording is only posted because the Talkshoe recording has not been posted on our program page as of this morning. The Talkshoe recording is also evidently truncated, from the information which is currently on the website. If Talkshoe recitifes the problems and posts a recording of this program, it will be used to replace the recording here.

This program is basically just a summary of the past four. The balance of Joe November's "Shills R Us" paper, which this series was designed to address, shall be answered methodically over the next several weeks in the Christogenea Forum.

We have said that the Book of Acts is a book of transition, and introducing the book in the first segment of this presentation we described some of the aspects of that transition. One of the things that we said is that it records a transition “from the rituals of the laws of the Old Covenant to a faith in the Word of God in Christ which was promised by the prophets of the Old Covenant, and which was recorded in the Gospel of the New Covenant”. Part of this transition is recorded in Acts chapters 10 and 11, where Peter witnessed and then acknowledged that the members of the household of Kornelios (Cornelius) had received the Holy Spirit upon hearing the Word of God, and ostensibly upon having accepted it, and it was specifically noted that this happened apart from a ritual of water baptism. Another of the things we said in our introduction is that Acts “records a transition of the primary subject of the Word of God from the remnant of Jerusalem to the dispersion of the children of Israel, the 'lost sheep' of the ancient dispersions.” The beginnings of this transition are also recorded in Acts chapters 10 and 11, where through Peter's vision the apostles had discovered that the Nations – which in a historical context refers to the Nations of the Adamic oikoumene – were to receive the Gospel of Christ.

We do not know much about the Reedy's, or why the White couple, who had four children, were separated just months after the birth of their young daughter. However rather than living with her husband James, on June 7th, 2013, Jennifer Reedy was admittedly sleeping in her home 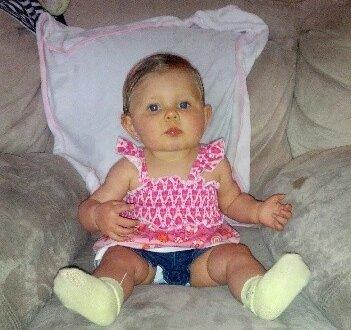 with a Mexican illegal alien named Jose Luis Aguilar when her 9-month old daughter, Serenity, was raped and murdered by the animal. Reports say that Reedy had taken her so-called “boyfriend” into her home about a month before her daughter's murder. According to the Richland, Washington Tri-City Herald, the baby had severe injuries to both her head and vagina. According to Columbia County's KEPR television “Reedy said Aguilar wanted to have sex that night but she told him no. She said Aguilar told her he would go take care of himself.” Evidently he did, with a little help from Serenity. A video report from the same source quotes a doctor who said there was “massive damage to [Serenity's] genital region.” The Tri-City Herald reports that Aguilar was picked up in a Greyhound bus in Barstow, California.

In October of 2010, discussing the 38th and 39th chapters of Ezekiel, both Eli James (October 15th) and Greg Howard (October 22nd) fully agreed with William Finck's views on eschatology as they related to the non-Adamic races. How did they do a 180-degree change by January, 2011?

Discussing Acts Chapter 10 over these past few programs, there are several conclusions that I think we can draw with the utmost certainty. First, in spite of Peter's words in his initial reactions, we must interpret Peter's vision by the words of Yahweh God which Peter transmitted to us, and therefore while that vision had included all of the four-footed creatures, creeping things and birds, Peter was only beckoned not to consider profane, or common, the things which Yahweh had cleansed. Examining the words of the prophets in relation to this, we saw that Yahweh intended to cleanse the children of Israel, and only Israel, on the cross of Christ. Therefore Peter's vision can only apply to Israelites. Secondly, and in relation to this same thing, we saw the difference between the words unclean, and common, which is also often rendered as profane. Things deemed unclean by the law of God cannot ever be cleansed. However things which are clean by the law, but which have been soiled or defiled, are considered profane and can be cleansed. While we did not discuss it last week, we did read several prophecies which also told us that even the Name of Yahweh was profaned by the children of Israel in their many sins, but that He would sanctify His Name as well. Therefore, with the Gospel, we can deduct that sheep can indeed be cleansed, being clean under the law. However pigs and dogs can never be cleansed. Finally, we saw that it is the Cross of Christ by which the children of Israel were cleansed, and they sanctify themselves when they receive His Word through the Gospel, as He said in John 15:3: “Now ye are clean through the word which I have spoken unto you.” Therefore once it was discovered by Peter that those of the Nations received the Holy Spirit without water baptism, which was the baptism of John, then water was never mentioned in connection with baptism again. In this regard Peter recalled the words of Christ, as we shall see here in Acts chapter 11, and which are also recorded in Acts chapter 1, that “Iohannes immersed in water, but you shall be immersed in the Holy Spirit after not many days hence.”