Presented in this podcast are William Finck's Broken Cisterns essays, Parts 1 and 2.

Last week we covered Matthew chapter 24 and the Scriptures which discuss the abomination of desolation, “spoken of by Daniel the prophet”, which refers to several prophecies in Daniel chapters 11 and 12. We saw that the term reads “abomination which maketh desolate” in some manuscripts in some places in Daniel. The periods of time in prophetic days given by Daniel for this may be interpreted so that this abomination may be tied to both Mohammedanism & Judaism, and the Zionist Judaism which gave us the artificial Israeli state in 1948 in particular. Both Mohammedanism and Judaism, I believe, are Satanic religions devised by the jews, who have absconded the Old Testament and have abused the oracles of God for their own purposes.

We also discussed at length the prophecy by Christ concerning the budding of the fig tree, when it shoots forth its branches, and how that must have referred to that fig tree that was cursed by Christ. Let us read the parable of the fig tree, from Luke chapter 13: 6 Then He spoke this parable: “A man had a fig tree planted in his vineyard, and he came seeking fruit in it and found none. 7 And he said to the vine-dresser, ‘Look, it is three years from which I have come seeking fruit in this fig tree and I find none. Cut it down, for why should the land be useless?’ 8 But answering he says to him: ‘Master, leave it this year also, until when I should dig around it and cast manure 9 and so then it may produce fruit in the future, but otherwise if not, you shall cut it down.’” Jerusalem produced no fruit for Christ in His final year either. So the fig tree that was Jerusalem was indeed cut down, and from that time on we cannot imagine, under any circumstances, there ever having come one good thing from Judaism or from the descendants of those people. So where Christ says in Matthew 24:32-34: “32 Now learn from the parable of the fig tree, when already its branches should be tender and it would produce leaves, you know that summer is near. 33 Thusly also you, when you should see all these things, know that it is near by the doors. 34 Truly I say to you that by no means should this race escape until all these things should happen!” Today the jews are producing leaves, and their branches have extended to control all the earth. So we know that the harvest approaches.

In Matthew chapter 24 we saw a single discourse by Christ which answered three questions, which I shall repeat here because He is still addressing those questions in the three parables which comprise Matthew chapter 25, as our Bibles are now divided. The questions posed to Him by the apostles were these: 1. “Tell us, when shall these things be?”, in reference to His statements concerning the destruction of Jerusalem. 2. “What is the sign of Your coming...?” in reference to the ultimate return of the Christ, and 3. “...and of the consummation of the age?” which is in reference to Christ's many statements which mentioned the end of the age. In Matthew chapter 24 we saw that some of Christ's discourse applied specifically to first century Judaea. This is especially evident, as it was exposited from a harmony of the prophecies of Christ here as they were also recorded in Mark and in Luke. Yet much of His discourse as it was recorded in Matthew 24 – and in Mark and in Luke - still awaits fulfillment: since it does not describe any circumstance which occurred in the first century at the destruction of Old Jerusalem, nor has it been fulfilled to this day. So the three parables which we are about to discuss, which are indeed a continuation of His answer to those questions regarding the time of the end and His coming, are especially pertinent to us now, and in the days which lie ahead.

The Beasts that Dwell Among Us

How does a 30-year Baptist Pastor find his way to Christian Identity? Because he recognizes that it is truth! Pastor Jeromy Visser also later joins the conversation.

Last week we ended with Luke's version of the discourse given by Christ which is found here at Matthew 24:15-22. In Luke we saw the exact historical fulfillment, as recorded by the historian Flavius Josephus, of Christ's words as they are recorded at Luke 21:20-25, concerning the forecast destruction of Jerusalem. Yet it is evident that Christ must have given a longer statement, and that Luke's record of it focused more specifically on what was said about Jerusalem, while the accounts of the discourse recorded by Matthew and Mark relate a more general prophecy.

Matthew 24 15 Therefore when you should see the abomination of desolation, which was spoken by Daniel the prophet, standing in the holy place he reading must understand 16 then those who are in Judaea must flee into the mountains; 17 he upon the house-top must not go down to take his things from the house, 18 and he in the field must not turn back to take his garment. 19 But woe to those being pregnant and those with infants in those days! 20 And you must pray that your flight should not be in winter nor on the Sabbath. 21 For at that time there shall be great tribulation, such as has not happened from the beginning of Society until now, nor by any means should happen! 22 And unless those days would be shortened, there would not be any flesh saved. But on account of the elect shall those days be shortened.

How are they "conservative", spitting in the face of their heritage? The youth of CPAC have been brain-washed with those same jewish ideals of race-mixing and perversity which have long ruined the "Progressives" and "Liberals" as well. Therefore the "Conservatives" are no longer about conserving anything!

Here are two videos. In the first, White Nationalist Jamie Kelso (who is much closer to true Conservatism than the youth at CPAC may ever be) is virtually run out of CPAC. Never, ever have I seen a DUMBER group of White people than these fools at CPAC! In the second video, Ryan Sorba justly scolds CPAC for coddling sexual deviants. 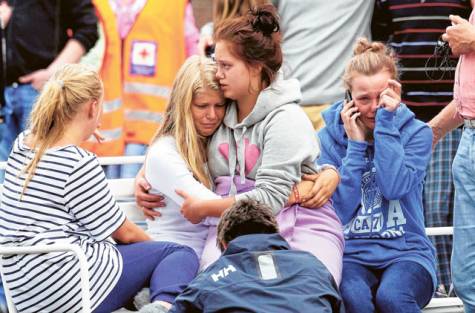 Last week we saw at the end of Matthew Chapter 23 that Christ exclaimed to the Judaeans “Behold, your house is left to you desolate!” We then saw from Daniel 9:24-27 that Christ was really only confirming something that Yahweh had long ago prophesied through Daniel. Here I shall repeat Daniel 9:24-27 once again, which is Daniel's 70-Weeks Prophecy concerning the advent of the Messiah: “24 Seventy weeks are determined upon thy people and upon thy holy city, to finish the transgression, and to make an end of sins, and to make reconciliation for iniquity, and to bring in everlasting righteousness, and to seal up the vision and prophecy, and to anoint the most Holy. 25 Know therefore and understand, that from the going forth of the commandment to restore and to build Jerusalem unto the Messiah the Prince shall be seven weeks, and threescore and two weeks: the street shall be built again, and the wall, even in troublous times. 26 And after threescore and two weeks shall Messiah be cut off, but not for himself: and the people of the prince that shall come shall destroy the city and the sanctuary; and the end thereof shall be with a flood, and unto the end of the war desolations are determined. 27 And he shall confirm the covenant with many for one week: and in the midst of the week he shall cause the sacrifice and the oblation to cease, and for the overspreading of abominations he shall make it desolate, even until the consummation, and that determined shall be poured upon the desolate.” Christ then exclaimed “For I say to you, by no means may you see Me from now until you should say ‘Blessed is He coming in the name of Yahweh’!” But His triumphant march into Jerusalem had already happened prior to this statement, and therefore those words must have yet another fulfillment.

XXIII 1 Then Yahshua spoke to the crowds and to His students 2 saying: “The scribes and the Pharisees sit upon the seat of Moses. 3 Therefore all things whatever they should tell you, you do and you keep. But according to their deeds you do not do. For they say and do not do.

The seat of Moses is the seat of authority in Judaea. Many Christians, being rebellious, do not like this, but Yahshua Christ was indeed telling His students to submit to the worldly authority. One lesson which is fully evident throughout the Old Testament is that God uses worldly authority to punish a sinful people. And when that happens, even the good people among them suffer on account of it. The children of Israel did evil before Yahweh on many occasions, and He gave them over to both wicked rulers and other nations.