Click Here for the Article, European Misunion, covered in this podcast.

On this program we also presented the text of the Ezra Pound broadcast below, which was both a dire and prophetic warning to the English people.

[Pound broadcast at least 120 original editorial and manifestos over Radio Rome in Italy from 1941 to 1943. We are reprinting two of these broadcasts to encourage discussion of them and to point readers toward the entire book. The full text of 120 broadcasts is available in "Ezra Pound Speaking": Radio Speeches of World War II. Ed. Leonard W. Doob. Westport, Conn.: Greenwood Press, 1978.]

In Mark chapter 11, we saw the cursing of the fig tree, which we related to the parable of the fig tree and the explanation of the fruitlessness of Christ's mission in Jerusalem. We then related how this was the final fulfillment of the dispersion of the Bad Figs of Jeremiah chapter 24, which is proven when comparing the language of Jeremiah to that of Christ concerning Jerusalem in his prophecy of its impending destruction as it is recorded in Luke chapter 21. We will discuss that at length here again next week, since it is also a subject of the latter half of Mark chapter 13. All of these prophecies and parables are part of a related theme, and so is the Parable of the Vineyard which we are about to read here in Mark chapter 12.

XII 1 And He began to speak to them in parables: “A man planted a vineyard and put a fence around it and dug a vat and built a tower and let it out to husbandmen, and he traveled abroad. 2 And he sent a servant to the husbandmen at the appropriate time, in order that he would receive from the husbandmen from the fruits of the vineyard, 3 and taking him they cudgeled him and sent him away empty. 4 And again he sent to them another servant, and him they hit on the head and dishonored. 5 And he sent another, and him they slew, and many others, some then being cudgeled, but some being slain. 6 Yet he had one beloved son. He sent him to them last saying that ‘They shall respect my son!’ 7 But those husbandmen said to themselves that ‘This is the heir! Come, we should kill him, and the inheritance shall be ours!’ 8 And taking him they killed him and cast him outside of the vineyard. 9 So, what shall the master of the vineyard do? He shall come and destroy those husbandmen and let the vineyard out to others!

Jewish international capital and jewish marxism work together to force the European nation states to abandon their sovereignty and maintain a European Misunion, while the liberal media demonizes nationalism and anything else in the interest of White Christians. Adolf Hitler was right!

Don't get it? See my December 5th, 2010 presentation Adolf Hitler on Globalism at the Christogenea Mein Kampf Project.

Mike Stathis, Financial Expert, Author, and Producer of the video found below: How the Jewish Mafia Screwed You.

X 1 And arising from there He goes into the borders of Judaea and on the other side of the Jordan, and the crowds again come together to Him, and as He is accustomed, again He taught them. 2 And the Pharisees having come forth questioned Him whether it is lawful for a man to put away a wife, trying Him. 3 Then replying He said to them: “What did Moses command you?” 4 And they said: “Moses permitted to write a letter for a bill of divorce and to put her away.” 5 Then Yahshua said to them: “For your hardness of heart he had written this commandment for you. 6 But from the beginning of creation ‘He made them male and female. 7 On account of this a man shall leave his father and mother and shall cleave to his wife, 8 and they shall be two into one flesh.’ Therefore no longer are they two but one flesh. 9 So that which Yahweh has yoked together man must not separate!”

A certain so-called Christian Identity pastor recently stated on his Talkshoe program that Christ's words here do not condemn divorce. Yet clearly, considering the context, Christ is indeed condemning divorce. Otherwise, He would not have proceeded to quote Genesis 2:24, where it says that “Therefore shall a man leave his father and his mother, and shall cleave unto his wife: and they shall be one flesh”. It is the act of putting away which is divorce. The “bill of divorcement” is only a receipt which records the act.

Click here to download this audio snippet of (aka) Eli James' Voice of Christian Israel program titled "Exterminationism". The snippet is from the original recording from 42:10 to 52:05 minutes. It proves beyond doubt, from Eli James' own words, that he is indeed a universalist.

In a community where only one member has the license to create “money”, from nothing, and demand interest for its use, the inevitable result is that the one member ends up owning everything in the community. Like the more familiar laws of physics, this should be the first law of finance, and a usury-based economy would be an easily recognized evil. But it is never taught in schools, and the true mechanisms of the usury-based economy are forever hidden from the average man, as the inevitable onset of inflation and higher and higher taxes take more and more of his wages away from him. 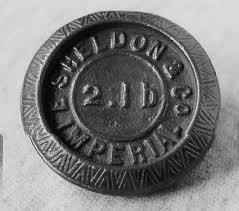 The God of the Bible demands that the people use just and equal weights and measures, engaging in trade fairly. A currency should not be a vehicle used to facilitate the enslavement of a people. It is only supposed to be a tool of the people, allowing them to fairly engage in commerce with one another. For a currency to be honest, a currency must be organic, home-grown and representing the production of the people that it is produced to serve.

The Immigration Problem and Biblical Prophecy

I originally wrote this essay a couple of election cycles ago, when the issue of immigration was big news in the media. When the media starts talking about illegal immigration, it is usually only to portray those who resist it as backwards and racist. The results today, noticed at least five years after this paper was originally written, show that perspective to be the correct one. Here I have updated this paper somewhat, in order to discuss more recent events and to improve on its perspective.

With the practical marginalization of the somewhat more conservative “tea party” movement in the United States, after it was co-opted by the jewish-controlled media, and with public dissatisfaction over the failed usury-based economy growing, the spotlight has now turned to the new Bolsheviki, the “occupy” movement. The “occupy” movement, led by jews and sexual deviants, filled with the disgruntled unemployed and a motley collection of vagrants who have evidently never even occupied themselves, is obviously another false solution brought to us by those same international bankers who brought us the likes of Rush, Limbaugh, Glen Beck and Sarah Palin.

Matthew Ott filled in for William Finck as he was travelling this week.

Discussing Mark last week I had made a radical comment concerning the blood brothers of Christ, that some of them were apostles. Here I will go over that again, because it is something which has not been discussed sufficiently, and due to a few inquiries I received, perhaps some people did not understand it.

The lists of apostles at Mark 3 and Matthew 10 agree: Simon Peter; James the son of Zebedee; John the brother of James; Andrew; Philip; Bartholomew; Matthew; Thomas; James the son of Alphaeus; Lebbaeus Thaddaeus; Simon the Cananean; and Judas Iscariot.

In Luke chapter 6 there is a James mentioned with John who must be that same brother and son of Zebedee mentioned in Matthew and Mark. Yet in Luke's list Lebbaeus Thaddaeus – who is only mentioned twice, once each in the original lists of Matthew and Mark - is not mentioned and seems to have dropped out of sight, because he is never mentioned again.

To fill out the twelve, "Judas the brother of James" is mentioned in his place. In Luke's account in Acts we see mentioned “Petros and Iohannes, and Iakobos [James] and Andreas [Andrew was Peter's brother, James and John were the sons of Zebedee], Philippos and Thomas, Bartholomaios and Maththaios, Iakobos [James] son of Alphaios, and Simon the zealot [the Cananean] and Iouda the brother of Iakobos.” The lists in Matthew and Mark being early in Christ's ministry, Lebbaeus Thaddaeus must have dropped out at some point for some reason, and Jude the brother of James filled the list out to twelve again when Luke made his lists.