What follows are the rough notes which were prepared and employed for this presentation. They are of course incomplete, and not all of the notes were used. I thought I should post them here nevertheless. There may be a Saxon Messenger editorial which follows. These notes were made prior to the development of certain events discussed in the program.

1st — Leonid Kravchuk (1991–1994): A Communist Party politician all his life, he declared Ukraine independent from the crumbling Soviet Union in 1991. The Soviet bureaucratic infrastructure was retained. Kravchuk was not a freedom-lover or an innovator, but was rather a compromise between Soviet traditionalists (conservatives) and reformers.

After leaving office, Kravchuk joined a business and political group known as Kiev Holding or the Dynamo Group. This group, led by oligarchs Viktor Medvedchuk (pro-Soviet Ukranian lawyer) and Hryhoriy Surkis (Ukranian Jew businessman and politician), is formally organized as the Social Democratic Party of Ukraine (marginalized since Orange Revolution). Despite its formal centrist/social-democratic slogans, the party is widely associated with big business, organized crime, corruption, and media bias.

The Three Tribes of Judah, Part 1

Micah 2:1 Woe to them that devise iniquity, and work evil upon their beds! when the morning is light, they practise it, because it is in the power of their hand.

The phrase “work evil upon their beds” is not a reference to the sexual fornication which had become commonplace, although it could certainly be inclusive of that. Rather, it is a reference to the proclivity of the people to dream up wicked schemes as they lie in bed at night, putting their ungodly desires to practice when they awake in the morning. The Septuagint reads: “They meditated troubles, and wrought wickedness on their beds, and they put it in execution with the daylight; for they have not lifted up their hands to God.” When the children of Israel turn to Yahweh their God, He makes a smooth path for them. As John the Baptist said of Christ, “the crooked shall be made straight, and the rough ways shall be made smooth” (Luke 3:5).

In a world without God, there is nothing left but materialism. In a people who have no hope in a transcendental existence, there is nothing left but carnal lust and the desire to enrich oneself, even at the expense of one's own kindred and tribe. The wealthy, and governments which whore themselves off to the wealthy under the guise of bureaucracy, oppress their own kindred by using legal and political mechanisms in order to deprive them of their property and hard-earned wages.

Israel, fallen into apostasy and the paganism which had been mandated by the State since the days of Jeroboam I (1 Kings 12:26-33), had fallen to the level of self-serving decadence which is found in what we now call materialism. That is the same state which most formerly Christian White nations find themselves in once again today. How do they not merit the impending judgment of Yahweh once again?

The descendants of Ishmael and Esau.

The prophecy of Micah parallels those of Isaiah, Hosea, and Amos, who were all prophets of the 8th century BC. The ministries of all four of these prophets were focused on forecasting God's impending judgment of the ancient northern Kingdom of Israel, although they all also prophesied of other things, such as the sin and impending judgment of Judah and Jerusalem, of Christ, and of Israel's eventual restoration. The prophet Jonah is earlier than any of these, but he was not concerned with the destruction of Israel. Rather, Jonah sought the preservation of Israel, imagining that Yahweh would destroy the encroaching Assyrians instead. It was demonstrated in our presentation of Amos that Assyria and Israel had been struggling back-and-forth for over a hundred years before the final destruction of Samaria. For instance, we had demonstrated from correlating the Bible with certain ancient Assyrian inscriptions that the restoration to Israel of Hamath, Damascus and the northern plain by Jeroboam II which is mentioned in 2 Kings chapter 14 was in response to earlier Assyrian subjugation of that area. Even earlier than that, we saw in Assyrian inscriptions that the Israelite king Ahab had sent a force of 10,000 foot-soldiers to join a mostly Syrian coalition army against Assyrian expansion into the Levant, something which is not mentioned in the Bible. Ahab was over a hundred years before Jotham, the king of Judah when Micah began his ministry. The lesson of the gourd in Jonah is that Yahweh was indeed going to use Assyria's expanding empire to preserve Israel by taking Israel into captivity. Jonah recorded the lesson of the gourd, but he evidently did not understand it.

The next prophet after Micah is Nahum, a prophet of the 7th century who was indeed focused on Yahweh's revenge against the Assyrians, something which Isaiah also prophesied about at length. The prophet Joel, usually and incorrectly dated to an earlier period, was also a prophet of the 7th century BC, as the third chapter of his book demonstrates. Obadiah is also usually dated to have been written at an early time, but his prophecy could not have been written until after the fall of Jerusalem (verses 10-14). Scholars who dispute the prophecies concerning Edom do not understand who Edom is in the world today, and therefore they cannot understand Obadiah. Aside from these and a few other less significant questions, the King James translators were fair in estimating the proper order of the minor prophets.

The prophecy of Micah has three basic messages: the sin, punishment, and restoration of Israel, which are repeated in different ways. An abuse of Micah feeds Judeo-Zionist interpretations concerning Palestine today, and they with their sick fantasies concerning the enemies of Christ actually deny Micah's true message. Micah's writing is most notable for it's Messianic prophecy found in chapter 5, and its prophecy of the gathering of Israel found in chapter 4. 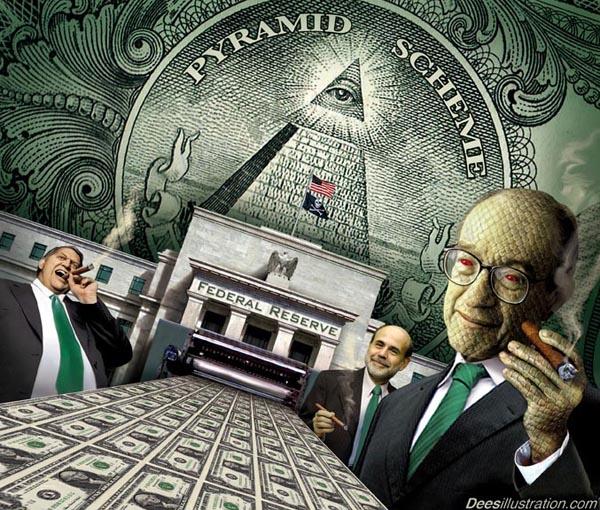 Slavery for a Hundred Years .. and Longer

In the United States the Federal Reserve turned 100 years old this December, an event which the institution itself commemorated, and which is mentioned in several articles on its own websites. While it was also celebrated to some degree in the mass media, there was little mass media criticism of the Fed's one-hundred-year history. In fact, outlets such as USA Today actually celebrated the outgoing Fed chairman, and in an article entitled “5 things you didn't know about 100-year-old Fed”, while it justly blames the institution for such events as the Great Depression, it portrays even that in the best possible light. However this USA Today article, in its last item in the list and the only one of the five which is relevant to current events, only celebrates the Fed's recent introduction of digital check clearing technology. Conservative estimates of the potential cost to taxpayers of recent bank bailouts orchestrated by the Federal Reserve run from 9 trillion (The New York Times) to over 12 trillion (PBS.org) to 14 trillion (CNN.com) to as much as 29 trillion dollars (CNBC.com). But all that USA Today has to discuss concerning the Fed in this era is the inevitable adoption of digital check clearing! If most Americans are ignorant – and it can be demonstrated that they certainly are – it is because they are too trusting of the media by which they expect to be informed. Reporting on the Fed's anniversary by most of the other major media outlets seemed sterile, to say the least, and with a few exceptions, apparently none of them ever challenge the nonsensical idea that the Federal Reserve is a legitimate institution concerned with the national interest.

Our criticism of the so-called "Lost Chapter of Acts", or "Acts 29", as it is often called, is far from complete. This is an extemporaneous discussion, which became necessary because of the inconveniences we faced while travelling this week. We may offer a more complete examination and refuttal of this fraudulent piece of literature in the near future. In the meantime, here is a page that contains the material which we were addressing: http://israelect.com/ChildrenOfYahweh/Campbell/lost_chapter.htm

Likewise, after the first hour or so of the program, we did not think that we would get to address the idea of pre-existence of the spirit in this program, since the other topics which we discussed had taken longer than anticipated. However we did get a chance to address that idea in brief, thanks to the efforts of Tom in Idaho, who called in and compelled us to address the issue. We thank Tom for his edifying participation, and we thank the other callers as well.