See the March 2012 Saxon Messenger editorial, Lambs to the Slaughter, for the text and resources employed in the research for this program.

In the first chapter, the thrust of Peter's message was in support of the truth of the Gospel accounts. Here in the second chapter, he addresses the nature of the adversaries of that Gospel.

II 1 Now there were also false prophets among the people, as even among you there shall be false teachers who shall introduce destructive systems of philosophy, even denying the Master who has bought them, bringing upon themselves quick destruction, 2 and many shall follow in their licentiousness, because of whom the way of truth shall be blasphemed, 3 and with greediness they shall make profit from you with fictitious words, for whom from of old their judgment is not idle and their destruction does not sleep!

All of the world's so-called "Central Banks" operate in the same crooked way: they are all permanent pyramid schemes designed to enslave entire nations in debt. This 12-year-old girl understands it. Make certain that your neighbors do also!

The solution: "the Jews may not licitly keep those things which they have extorted from others through usury" - Saint Thomas Aquinas, from his letter to Margaret the duchess of Flanders.

In 1932 Adolf Hitler instituted a currency in Germany which was based upon the actual economic output of the nation. It paid no interest to any bank for its use, and it was debt-free. Germany boomed while the rest of the world was in a banker-orchestrated depression. Therefore, the jews declared war on Germany, using the excuse of "anti-semitism" to destroy it! While there is more to the German story than that, it is clear that jewry attempted to enslave Germany to communism first, and Hitler also prevented that. Thus is the cause of "antisemitism", which is the refusal of non-jews to be enslaved by the jews!

White Christians must stop believing the jewish-controlled media, and only then can they begin to honestly investigate the hidden forces behind "history".

This month in The Saxon Messenger we are reprinting Chaucer's The Prioress' Tale, which is a story about young Hugh of Lincoln, who lived and died in the 13th century. Nowadays, when The Canterbury Tales are reprinted, the story is often omitted from publication. It is about a young boy killed by the Jews in what is commonly called a Jewish ritual murder. Similar circumstances surrounded the deaths of many other young boys and girls of medieval and modern Europe. It should be no wonder, with the prevalence of Jews in society now, that many children each year are still disappearing. 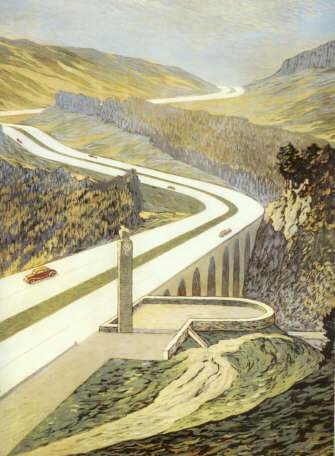 The creation of the Autobahn is just one of the magnificent achievements credited to Adolf Hitler's National Socialism that benefited the people rather than the bankers. From March 1933 onward, laws were passed that changed German society from a degenerate Jewish-dominated and foreign-ruled economic basket-case to an orderly, independent and prosperous, Christian people-state once again. Rodney and Carolyn  discuss these laws, policies and programs ... from anti-vivisection to Volksgemeinschaft, from religion to racial policy ... and why they brought about a healthy society.

Here are the comments of Eusebius on 2 Peter, from his Ecclesiastical History, Book 3: Chapter III. The Epistles of the Apostles.

“1 One epistle of Peter, that called the first, is acknowledged as genuine. And this the ancient elders used freely in their own writings as an undisputed work. But we have learned that his extant second Epistle does not belong to the canon; yet, as it has appeared profitable to many, it has been used with the other Scriptures. 2 The so-called Acts of Peter, however, and the Gospel which bears his name, and the Preaching and the Apocalypse, as they are called, we know have not been universally accepted, because no ecclesiastical writer, ancient or modern, has made use of testimonies drawn from them. 3 But in the course of my history I shall be careful to show, in addition to the official succession, what ecclesiastical writers have from time to time made use of any of the disputed works, and what they have said in regard to the canonical and accepted writings, as well as in regard to those which are not of this class.” From a footnote (20): “Although disputed by many, as already remarked, and consequently not looked upon as certainly canonical until the end of the fourth century, the epistle was yet used, as Eusebius says, quite widely from the time of Origen on, e.g. by Origen, Firmilian, Cyprian, Hippolytus, Methodius, etc. The same is true, however, of other writings, which the Church afterward placed among the Apocrypha.”

Last week we saw that in 1 Peter chapter 2 the apostle admonishes his readers: “13 You must be obedient to every authority created by mankind on account of the Prince, whether to kings as if being superior, 14 or to governors as if being sent by Him for the punishment of evil-doers but for the praise of those doing good. 15 Because thusly is the will of Yahweh: doing good to muzzle the ignorance of foolish men, 16 as free men yet not as if having freedom for a cover for evil, but as servants of Yahweh.” These words are very much like those of Paul of Tarsus in his letter to the Romans, in chapter 13.

From the Oxford Dictionary of Politics: freedom of association

The freedom of individuals to associate as an end in itself or with a view to pursuing common projects, e.g. through churches, trade unions, political parties, and sporting clubs. Freedom of association is widely seen by liberal political philosophers as a core personal liberty, warranting strict protection by the state, though the exact contours of the freedom, and how it is appropriately balanced against other values, are a matter of considerable and continuing dispute. John Stuart Mill, in On Liberty, argues that citizens should have ‘freedom to unite for any purpose not involving harm to others’, a formulation which leaves open the question of what counts as sufficient harm to others to justify state interference. John Rawls (1921-2002), in Political Liberalism (1993), argues that freedom of association is a ‘basic liberty’ because, and to the extent that, it is an extension of liberty of conscience. [An excellent assessment, and conscience must include religious conscience. – WRF]

All of the points Napolitano raises here are absolutely valid, and this is a surprisingly candid look at what is really going on in American politics today. No wonder he was fired. Only one thing is missing: the fact that the internationalist bankers - who are for the most part jews related to, financed by, or working for the jewish financial families of the City of London - are the real power behind it all. When corporations were allowed to participate in politics in this country, it was all downhill from there. 99% of the 1% are jews, and that is not by chance.

Judge Napolitano.How to get fired in under 5 mins.flv — Downloaded 750 times

Judge Napolitano.How to get fired in under 5 mins.mp4 — Downloaded 1067 times

The Color of Crime: New Century Foundation's report on differences in crime rates by race, bias in the justice system, and interracial crime. First published as a monograph in 1999, the new 2005 edition of The Color of Crime is now available on-line as a free PDF download.

Poverty is not an excuse for high Negro or Hispanic crime rates. Click here for a report from the U.S. Census Bureau, Table 695. Money Income of Families—Number and Distribution by Race and Hispanic Origin: 2009, from Income, Expenditures, Poverty, and Wealth, U.S. Census Bureau, Statistical Abstract of the United States: 2012. This report clearly shows that there are many more White families living in poverty than all minority groups combined.

Click here for an Open Office-formatted spreadsheet of some crime statistics  from http://fbi.gov which were collected and cited for this program. The statistics are publicly available at the FBI website.

Click here for the December, 2011 U.S. Department of Justice report, Correctional Population in the United States, 2010, in PDF format.

Finally, click here for a collection of items posted at the Saxon Messenger website, entitled The Beasts that Dwell Among Us, several of the reports which were cited for this program.