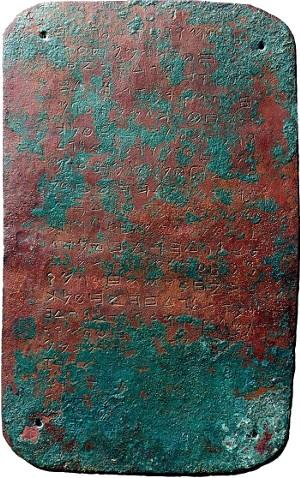 "Now the Phoenicians who came with Cadmus, and to whom the Gephyraei belonged, introduced into Greece upon their arrival a great variety of arts, among the rest of that writing, whereof the Greeks till then had, as I think, been ignorant." - Herodotus, The Histories, 5:58, George Rawlinson, translator

This engraved piece of copper, known as Manuscript 108, represents the earliest known writing in Greece. It's clear relationship to the Hebrew-Phoenician North Semitic alphabet also substantiates the testimony of many ancient Greek writers who attest that the Greek alphabet was developed from the Phoenician.

"An ABECEDARY contemporary with Homer, an amazing preservation of students' learning of the Greek alphabet at the very inception of its use. The Alphabet is repeated over and over, and contains the North Semitic (Phoenician) number of letters (22), ayin/aleph to taw/tau in Phoenician and Greek order, written in continuous retrograde lines. It represents the earliest and most complete link between Greek letter forms and the North Semitic parent forms."  (THE SCHØYEN COLLECTION)

In all fairness, we must state that there is an inscription extant with competing claims to be the oldest Greek alphabet, called the Dispilio Tablet. Claims have been made that this tablet is over 7000 years old. While that would not upset our worldview, that the Greek alphabet of 700 BC came from the Hebrew is clear not only in the shapes of the characters and the sounds they represent, but also in the names of the characters, the order they were drawn, and in the many historical accounts of the Greeks themselves.

While some of the character forms in the Dispilio Tablet are familiar, to us they seem to represent a strange hybrid of shapes similar to some of the Hebrew-Phoenician forms along with other characters which seem to be more closely related to some sort of primitive cuneiform. It cannot be said that they represent any direct ancestor of the later Phoenician or Greek alphabets, especially since there is no certainty of what the characters may represent.

If the Dispilio Tablet were indeed of the antiquity which is claimed, in our opinion we may perceive it as a precursor or a very early offshoot of some unknown proto-Mesopotamian script. However claims for the antiquity of the Dispilio Tablet cannot be made with the confidence that its discoverers exude. Carbon dating is simply not as accurate as many of its proponents believe. Additionally, even if the wood is of great antiquity, the inscription in the wood is not necessarily as old. Therefore caution must be employed before one attempts to rewrite the history of writing.