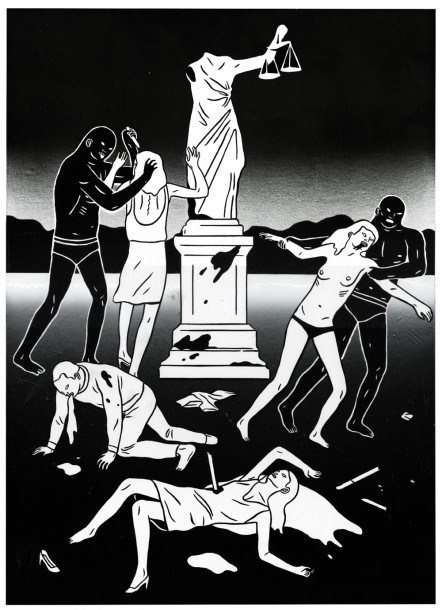 An earlier and equally foreboding mural than the one we discuss here, also by Cleon Patterson.

After a struggle of perhaps two years, in August of 1791 the King of France, Louis XVI, was forced to accept a new constitution which ended the absolute monarchy and turned over political authority to the National Assembly. However whether complete political rights were going to be extended to particular groups, namely women and Jews, was still being argued by the Assembly as many Frenchmen continued to uphold traditional values. A month later, on September 27th, 1791, a French lawyer, Freemason, and member of the secret society of the Jacobins proposed a motion titled “Admission of Jews to Rights of Citizenship”.

In the motion, Adrien Duport made the assertion that the French had declared by their “Constitution how all peoples of the earth could become French citizens and how all French citizens could become active citizens.” This was not necessarily true, but rather the new Constitution offered active citizenship only to adult French males who were not servants and only extended passive citizenship to others, creating two permanent classes. Yet it did not stop the Jacobin lawyer from arguing that “… it be declared relative to the Jews that they will be able to become active citizens, like all the peoples of the world, by fulfilling the conditions prescribed by the Constitution. I believe that freedom of worship no longer permits any distinction to be made between the political rights of citizens on the basis of their beliefs and I believe equally that the Jews cannot be the only exceptions to the enjoyment of these rights, when pagans, Turks, Muslims, Chinese even, men of all the sects, in short, are admitted to these rights.”

In truth, this was only the goal of the Jacobins, and “After several tumultuous discussions about the Jewish communities still excluded from political rights, the National Assembly finally voted to regularize the situation of all the different Jewish communities on 27 September 1791. Adrien Jean François Duport (1759–98), a deputy of the nobility of Paris, proposed the motion. The deputies shouted down those who attempted to speak against it, and it quickly passed.” [Source: chnm.gmu.edu]

A year later, the Monarchy was completely overthrown, and the new Constitution was nullified when the Jacobins led by Robespierre declared France a Republic, seized political control of the nation and instituted the Reign of Terror. France was de-Christianized, the calendars and feast days were all changed, and Christian priests became targets of persecution along with the nobility. A new god of reason was declared to be the Supreme Being, and the concept of active citizenship, consisting primarily of voting rights, was granted to all adult males regardless of race.

Perhaps once it embarked on this path, the fate for France was best foretold by the fate of one of its colonies, Saint-Domingue. With the danger of over-simplifying the account, a slave uprising led by a group called the Black Jacobins overthrew French authority on the island, and all Whites and those of mixed race, or mulattoes, were slaughtered – men, women and children. The Republic of Haiti was born, and it has been a virtual hell on earth ever since.

So France was steered down the path to destruction over two hundred years ago by the Jacobins, a secret society which was acting on behalf of French Jewry and which had adopted all of the ideals of Jewry which the Jews have historically promoted for all of Europe, and for the nations founded from European colonies abroad.

Today this Jewish plan for France has come near to its conclusion, and recently the Jews, and particularly the Rothschilds, have celebrated their new France by commissioning a 500-square meter mural painted directly beneath the Eiffel Tower. The painter, or supposed artist, an American named Cleon Peterson, is known for his macabre mixture of black and white human figures in his brutish and childishly insipid illustrations. This new mural is called Endless Sleep, which in this case is an obvious euphemism for genocide.

In a grotesque mockery of France’s present circumstances, are centered two human figures, one black and one white, in a romantic embrace. Dancing around them in a circle are three white couples, in the background, and three black ones in the foreground, which is another apparent social statement. But most nefarious of all, the arms of the black couples in the foreground form a shape which is very much like the familiar Star of David, and thereby we see who has been behind it all from the very beginning. 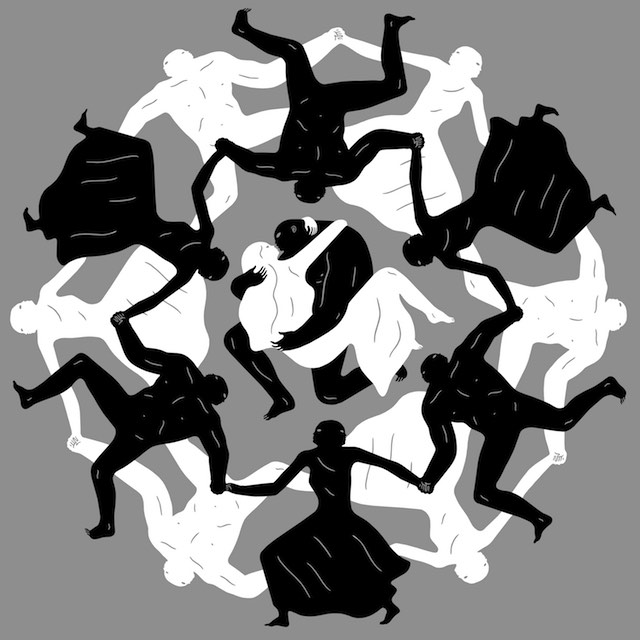