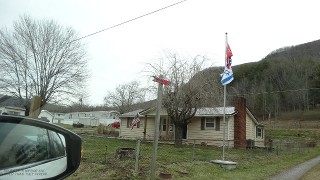 Since relocating to Southwestern Virginia this past fall, we have not had much time to get out and around much over the winter months. Today, February 11th, was one of the first opportunities which we had to do so, and therefore we took a ride west along State Route 58 towards Kentucky.

To our consternation, in southern Lee County, Virginia, we spotted three homes along our route which were flying Israeli flags, one having the strange audacity to be flying such a flag right under the beloved Stars & Bars! (Pictures of two of these homes accompany this article.) Never did we see such a thing in the many years that we lived in New York and New Jersey. 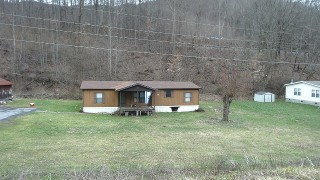 No longer should it be called the Bible Belt, since the Christians it once contained obviously no longer read their Bibles. The Beelzebub Belt is much more fitting, because now Christians are evidently no better than Jews. They are certainly worshipping Jews!

It is absolutely amazing to us, that in spite of what the Bible warns concerning those who would reject Christ, Christians are fooled into thinking that Jews can somehow be saved, and even have some sort of special place above Christians themselves! This is an absolute perversion of Scripture. 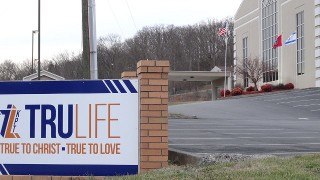 Christ told the Jews that "...I have spoken to you and you do not believe! The works which I do in the name of My Father, these things testify concerning Me. But you do not believe, because you are not My sheep!" (John 10:25-26). In other words, the unbelieving Jews were not ever Israelites in the first place!

We have papers here at Christogenea explaining all of these things at length, including The Anti-Christ for Dummies, A Concise 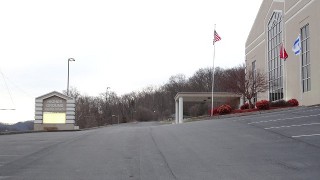 Explanation of the Creation of the Jewish People, and Should Christians Embrace the Jews? The apostle John made it very clear in his epistles where he explained that those who deny that Jesus is the Christ, they are the Anti-Christ. He also said in his second epistle that Christians should not even greet those who deny Christ, lest they also be responsible for their evil works (2 John 9-11). That would, of course, include all Jews. 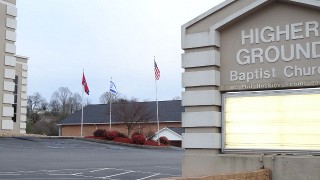 On our way home this evening, we had discussed how the people flying these flags had probably been poisoned and deceived into doing so by some Judaized Christian church. Never could we have guessed what we spotted a short time later. Driving through Kingsport, Tennessee, we saw a brand-new Baptist mega-church called the Higher Ground Baptist Church. The cement barely looked dry. On the flagpoles out front they had an Israeli flag blowing in the wind. A sign near its 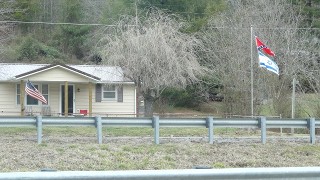 entrance bragged about being "True to Christ". Yet Christ said "He not gathering with Me scatters". We think the folks at Higher Ground are lying. They are not being true to Christ at all.

Christ warned twice in the Revelation, at verses 2:9 and 3:9, to beware of those who claimed to be Judaeans, but who were truly of the Synagogue of Satan. Thus is the Anti-Christ Jew. If they were indeed His sheep, they would have heard His voice.