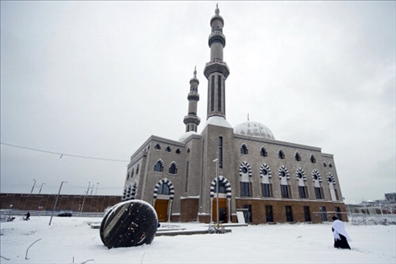 The largest mosque in Europe recently opened in the Netherlands. As more and more Muslims are granted entry into Europe - or simply enter whether or not they are permitted, the Muslims will get more and more brazen. Pictured here is a billboard advertisement put out by Muslims in Britain attacking not only Christmas, but Christianity itself. Yet when some Jew prints a cartoon depicting Mohammed in a newspaper, the Muslims go berserk and start slaughtering Christians in the streets, while the Jewish-controlled media finds a way to put even the blame for that upon Christians. WHY do Christians let them get away with such behavior? Do Christians - or even White Europeans who don't care about religion - not care at all about their own race or society? Or the futures of their own sons and daughters, nieces and nephews?

The religion of Islam has always been one of conquest and forced conversion and submission. As recently as the 1680's, the Muslim Turks had Vienna under siege. It still is a religion of conquest. The Jewish media has lied to Europeans, proclaiming that Islam is a "religion of peace". Why do the Jews make that proclamation in reference to Europe and America, but they do not make that proclamation in reference to Syria, Iraq, or Palestine? Islam is hardly a religion of peace. It has never rested until it is either forced to rest through military defeat, or until it has prevailed through violence. Just observe what has happened in Somalia, Southeast Asia, India and Pakistan, or anywhere else there are peoples of other religions neighboring Islamic tribes and countries, and not only Christians but Hindus, Buddhists and others. With Islam, there is no choice and no "democracy". If you do not stand up and defend Western Culture - and demand that your political leaders defend Western culture - then in 20 years you will all be slaves to the mullahs. 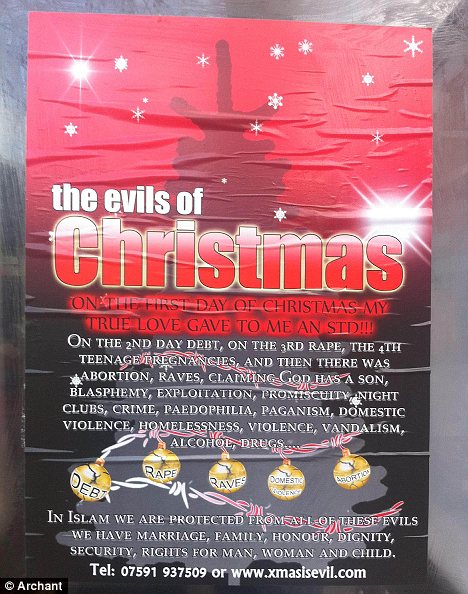 In the Koran, Sura 9:4-5 read thus: “9:4 Excepting those of the idolaters with whom ye (Muslims) have a treaty, and who have since abated nothing of your right nor have supported anyone against you. (As for these), fulfil their treaty to them till their term. Lo! Allah loveth those who keep their duty (unto Him). 9:5 Then, when the sacred months have passed, slay the idolaters wherever ye find them, and take them (captive), and besiege them, and prepare for them each ambush. But if they repent and establish worship and pay the poor-due, then leave their way free. Lo! Allah is Forgiving, Merciful.”

Jewish perfidy and philosobabble aside, without a doubt this Sura tells Muslims to honor any treaties they may have, but once the treaties have elapsed, to kill or forcibly convert all those who will not submit to their god. Of course, if there is no treaty in the first place, then the wait is unnecessary – there is no need at all for them to refrain from killing or forcing Christians to Islam. It is odd that Christians do not see the cognitive dissonance of Jewish propaganda concerning Muslims, where Christians are told to hate Muslims in the Middle East, but that they must accept them in their own homelands as they pour across their borders. It is obvious, that the Jews are purposefully flooding Christian lands with Muslims in another attempt to destroy Christianity. If Whites would only read the Koran, they would see that it is a book filled with blasphemies, especially concerning Christ and Christianity. But what else should one expect, from a book originally written by Talmudic Jews? Yes, it can be established that the Koran was written by Jews.

Islam puts on a pious face to the West. In reality it is full of rapine and all sorts of perversion. We have personally observed this among Muslims over many years of acquaintance with them in New York, Ohio and New Jersey. Prepubescent girls are forced into unions with 40 year-old, or older, men. Young boys are a constant sexual target for Islamic men. Paedophilia and homosexual activities are denounced in public, while they are common activities in Islamic homes in the middle east and elsewhere. What Islamic country has maintained a high civilization without Western intervention and Western money and technology? None, ever. Stand against Islam, or your children will be Muslims living in a new world, a world that very much resembles the Stone Age.

The following quotes are from thebody.com, a resource and information center for HIV/AIDS. They show that Muslims countries do indeed have problems with promiscuity and incontinence:

“Prior UNAIDS estimates had placed the number of people living with HIV in the region [the Muslim countries of the Middle East and North Africa] at about 412,000 at the end of 2008, "up from about 270 000 in 2007. However, to date, a lack of reliable data has hindered a clear understanding of HIV dynamics and trends in the region," according to a UNAIDS press release (6/30).” From http://www.thebody.com/content/world/art57241.html

Muslims have been trying to conquer Europe for 1,400 years. For most of that time far-superior European tactics and technological skills, among other factors, have repelled the Arab and Turkic hordes. Today we simply allow them entry as “immigrants”, and we somehow expect them to have changed, but they have not changed – only their tactics are different. Muslims in France see themselves as conquerors, not immigrants. The same attitude prevails among many Muslims in Britain. They roam the streets of Northern Europe in gangs, seeking young White women to devour. When someone that you know, even your own daughter - or son - gets raped and/or murdered by a roving horde of Islamic gangsters, know that another victim has fallen to the new arab invasion. Except this time Europeans were too stupid, or too intoxicated, to put up a fight. Is there not one Charles Martel left in all of Europe? Of course there isn't.

[This article had 928 reads on the old Saxon Messenger website.]