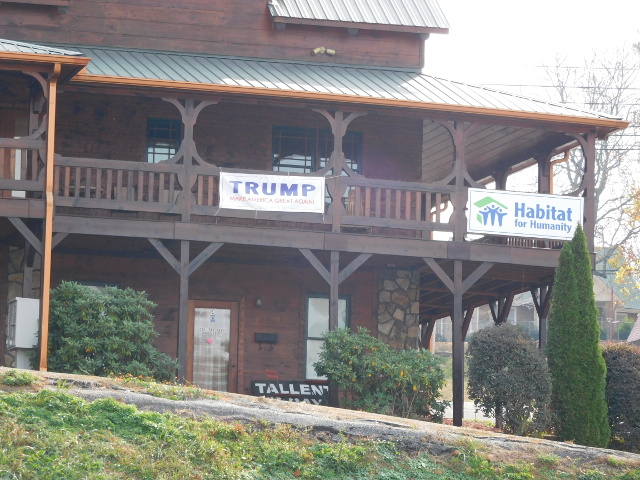 My wife and I have just completed a three-week road trip which brought us through parts of nine states from the Florida panhandle to Detroit, Michigan. While admittedly most of the area we covered in our travels was rather White and rural, and most of our time was spent in small towns, even passing through some large urban areas we never spotted a single bumper sticker supporting Hillary Clinton. We did see one Bernie Sanders sticker on Interstate 75 in Kentucky. But except for some paid advertising billboards, we saw only one sign supporting Hillary along the entire route. That was seen on the outskirts of Fostoria, Ohio, on a lawn in a neighborhood where several other houses had Trump lawn signs on display.

The observations of others in these same areas may of course differ, but here we can only report on what we have seen with our own eyes.

We should, however, also take note that negros and mexicans don't seem to use bumper stickers and lawn signs with any significant frequency. So we did not spot many bumper stickers on the interstates which took us through Detroit, Cincinnati and Atlanta. But along the way, we did overhear several negros vocally express support for Hillary Clinton. At a restaurant in Pigeon Forge, Tennessee, we were sitting by a pile of them. Four black couples perched on barstools at a few pushed-together high-top tables were noisily sucking on smoked chicken bones and yammering about the upcoming election. The dominant male of the troop had rather confidently expressed the idea that Hillary had already the election won, and that some "backroom deal" was made to make sure that "the other guy did not get anywhere". It would have been a priceless recording if we knew ahead of time what they were discussing. His attitude fully reflected the natural acceptance which negros have for criminal minds, so long as the criminals favor the negros. 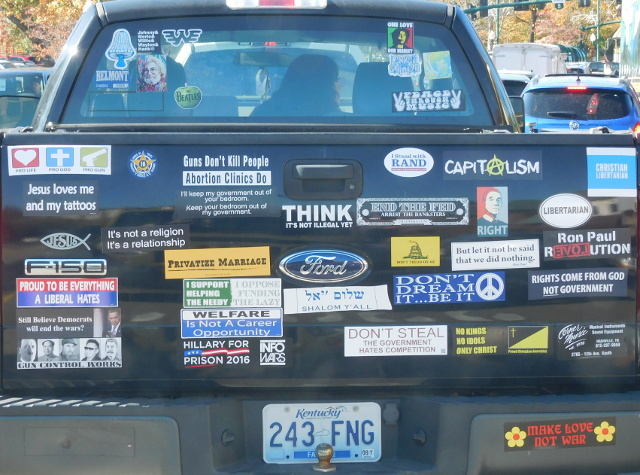 More than any other national election in recent American history, this one has divided the nation along racial lines. It seems that practically every White voter in the South and eastern Midwest will vote for Trump, and if any would not, we certainly could not tell as much along our route. In Blue Ridge, Georgia, even the local Habitat for Humanity office, an organization with typically liberal leanings, displayed a banner in support of Donald Trump. We saw literally thousands of signs in support of Trump, and a conspicuous lack of support for Hillary Clinton. There were more "Hillary for Prison" stickers than expressions of Hillary for President.

Along the divide, even distinctions between what is Left and what is Right are becoming blurred. A pick-up truck spotted in central Kentucky is exemplary of that, as it sported stickers professing ideas from both sides of the traditional political spectrum. But we should know that the traditional political spectrum has always been the artificial creation of the Jewish-controlled media anyway, and it is therefore bound to eventually disintegrate. We can only hope that this election speeds the process of disintegration down the path to the eventual fall of Babylon.

So with a Trump victory, we can only hope for massive unrest among negros and mexicans, so that even more Whites come to realize that egalitarianism as a social and political paradigm is a dismal failure. But with a Clinton victory, we are afraid that Whites will once again fall into a coma, never realizing the dangers they face if mexicans and negros become a significant majority before another White male is elected President. And if at least most Clinton supporters have their way, there may never be another White male elected President under any circumstances.

The sooner that most Whites realize that, and decide to do something serious to correct it, the nation may truly have an opportunity to recover.