Looking for something? Click here to view a listing of titles only.

“This is what you deserve. You get what you deserve, white boy.” So spewed the attackers of Melissa Coon’s 13-year-old son, as they doused him with gasoline and set him alight.

Police, they say, are “investigating” whether this is a hate crime.

When Whites are caught up in acts of violence and the victims are negroes, the media screams about it for months. So-called "hate crimes" laws are passed. The media attempts to make all Whites feel guilty. But the facts prove without a doubt that approximately (if not over) 90% of all violent inter-racial crimes have negro perpetrators and White victims. And the media usually ignores this fact, and also ignores many of these crimes.

The media is clearly biased when it comes to reporting on crime. There is a good analysis of this concerning this very case, in the article Teen Set on Fire in Racial Attack; Media Silent at The New American website.

Note what the cop says in the video, that "it is not uncommon for teenagers to fight". Well, what a misrepresentation of the facts that is, to make this crime look like the average neighborhood spat! And if it were not for the description on the placard, we would not know the race of the perpetrators from the news report.

Two Badly Burned Bodies Discovered on Detroit's Southwest Side: MyFoxDETROIT.com
The original article linked above has been removed by the news agency. We have preserved the video below.

The negroes have burned or looted everything useful and beautiful that the White man created in Detroit, until there was nothing left to burn but Whitey himself.

This report is based primarily on two data sources: the Pew Research Center's analysis of demographic data about new marriages in 2008 from the U.S. Census Bureau's American Community Survey (ACS) and the Pew Research Center's analysis of its own data from a nationwide telephone survey conducted from October 28 through November 30, 2009 among a nationally representative sample of 2,884 adults. For more information about data sources and methodology, see the Appendix III.

Black History Month? The manner in which American history is being taught today, one may think that every month of American history has been Black History Month. Wherever one looks, negroes are being foisted upon the public consciousness. Wherever one looks, imagined negro achievements are exalted and trumpeted while actual and tangible White accomplishments and White history are being diminished and ridiculed, and even criminalized. 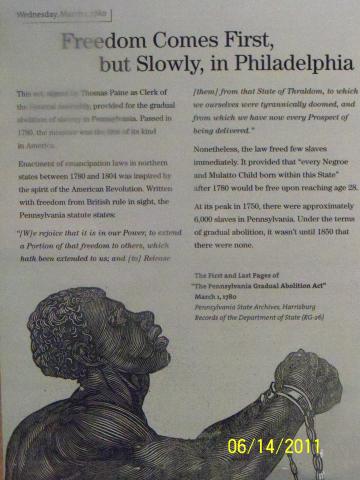 Framing our history within the context of negro slavery is a very narrow and biased way to look at the founding of this great nation. Taken by the author last year at the National Constitution Center in Philadelphia.

For instance, walking through the National Constitution Center in Philadelphia, there is nothing at all of any real substance on display about the American Constitution itself. And you certainly will not find the actual text of the Constitution. Rather, there is talk about negro slavery, freedom, and civil rights at every turn. The only other topic treated at length is woman's suffrage, wherever the Center has exhibitions for the period following the Civil War. The entire purpose of the National Constitution Center seems to be the exaltation of negroes in American society, and secondarily the exaltation of women, all while White culture is denigrated and White men are marked off as hypocrites. Absolutely forgotten is the inconvenient truth, that the American Constitution was a document created by and for White men, and for those White people whom the men that created it were representing. Explicitly stated in its preamble is the declaration that it was written to “secure the Blessings of Liberty to ourselves and our Posterity”, which means the descendants of those very same White people. It was never the plan of the founders of this nation to include anyone but Whites in its polity. Negroes were never intended to be considered as equals, as citizens, or as the recipients of this great White heritage. In taking them into the fold, so to speak, Whites have spit in the face of their ancestors, who actually had cared about them as their posterity that they left them a document whereby they could preserve their freedom and their independence - if only they'd have actually read that document.

Here in this video we see the ultimate disgust: yet jewry celebrates the attitudes which this 13-year-old girl repeats so unabashedly, and the jewish media crams these attitudes down our throats daily. It calls them "freedom" and "liberty" when they are really perversion and corruption. This is what 100 years of a jewish-controlled media and entertainment industry, coupled with the Frankfort School-inspired destruction of our educational systems, have brought to America: the dominance of Cultural Marxism, the jewish antithesis to Christianity. It has created a race of whores, both male and female, which is exactly what we have become.

Sodom and Gomorrah were brought to the ancient world by the Canaanite ancestors of the jews. Today, with the dissemination of jewry throughout the world, we have Sodom and Gomorrah everywhere. Is it an accident that Tel Aviv and New York are the world's top "gay" cities, being the two cities which also have the most jews? Is it an accident, that the jewish-controlled entertainment industry spouts nothing but sex and filth and trash daily? Are all of these things not frontal attacks against Christian values, morals, and principles?

This video is heavily edited. The girl speaking hardly utters more than one sentence in any given clip. This leads us to believe that she is being coached by an adult. There should be an investigation for child abuse, but are there laws against talmudic brainwashing? Would you even want your children in school with this girl? Surely she spouts this mental sewage out to all of her "friends" daily. Her parents must be proud of her.

The Bible tells us that it is the dragon which gives its power to the beast, and wherever we look into history beyond the surface, we can see that the Bible is absolutely true. Looking around the internet this past week for news out of South Africa, we see that one of the people most often mentioned in connection with the recent 100-year anniversary of the African National Congress is Joe Slovo, who died in 1995. He is celebrated on the front page of the official ANC website with the short article “Long live the memory of Joe Slovo”. On the South African Communist Party website, Slovo is figured much more prominently, even having a picture conspicuously positioned between two negroes in the website's banner. Slovo, an active member of the party since 1942, was its general secretary from 1984. For most of its existence, the ANC has been closely involved in an alliance with the SACP, and still is today. An article at South African History Online states that “In 1928 the CPSA and the African National Congress (ANC) began a close working relationship” (the CPSA was later renamed SACP).