We are going to offer George Rawlinson's comments upon this passage, after we read a paragraph from Strabo.

The Cassiterides are ten in number, and lie near each other in the ocean towards the north from the haven of the Artabri. [According to Strabo, the Artabri (or Arrotrebae) were an ancient Gallaecian Celtic tribe, living in the extreme north-west of modern Galicia, at the far northwest corner of Iberia] One of them is desert, but the others are inhabited by men in black cloaks, clad in tunics reaching to the feet, girt about the breast, and walking with staves, thus resembling the Furies we see in tragic representations. They subsist by their cattle, leading for the most part a wandering life. Of the metals they have tin and lead; which with skins they barter with the merchants for earthenware, salt, and brazen vessels. Formerly the Phœnicians alone carried on this traffic from Gades, concealing the passage from every one; and when the Romans followed a certain ship-master, that they also might find the market, the shipmaster of jealousy purposely ran his vessel upon a shoal, leading on those who followed him into the same destructive disaster; he himself escaped by means of a fragment of the ship, and received from the state the value of the cargo he had lost. The Romans nevertheless by frequent efforts discovered the passage, and as soon as Publius Crassus, passing over to them, perceived that the metals were dug out at a little depth, and that the men were peaceably disposed, he declared it to those who already wished to traffic in this sea for profit, although the passage was longer than that to Britain. Thus far concerning Iberia and the adjacent islands.

Publius Crasus lived during the times of the Punic Wars between Rome and Carthage, which consisted of three great wars fought from 246 down to 188 BC. According to Livy, the Romans were not really sailors at all, and had no military navy, before this time. It was out of their necessity to wage the wars that through much trial and error they developed a navy and the skills required to fight with the Phoenicians at sea.

Many commentators and historians simply take it for granted that the Greek name Cassiterides, or Tin Islands, applied to the islands which are now known as the Scilly Islands. However the Scilly Islands are not ten in number, but 27, including hundreds of rocks and small islets. Furthermore, the route from the Artabri to the Scilly Islands is much shorter than the route to Britain, and certainly not longer. Therefore I have always rejected the notion that the Cassiterides are the Scilly Islands, and do not even mention them in my essay on the Phoenicians, although I have discussed them elsewhere. I cannot prove it, but I do believe, that the Scilly Islands are the place where this Phoenician sea captain described by Strabo ran his boat onto the rocks, rather than circumnavigating them to reach some point in Wales north of them, and around the northern side of the peninsula called Cornwall today. The Cassiterides, with absolute certainty, are the promontories and islands of Wales and especially of Cornwall.

Here are the notes of George Rawlinson, found at the mentions of the Eridanus and of the Cassiterides in his translation of the passage from Herodotus which we opened with today:

On the mention of the Eridanus and the amber trade:

“Here Herodotus is over-cautious, and rejects as fable what we can see to be truth. The amber district upon the northern sea is the coast of the Baltic about the Gulf of Dantzig, and the mouths of the Vistula and Niemen, which is still one of the best amber regions in the world. The very name, Eridanus, lingers there in the Rhoduane, the small stream which washes the west side of the town of Dantzig. The word Eridanus (= Rhodanus) seems to have been applied, by the early inhabitants of Europe, to great and strong-running rivers.”

Now on the mention of the Cassiterides:

“This name was applied to the Selinae, or Scilly Isles; and the imperfect information respecting the site of the mines of tin led to the belief that they were there, instead of on the mainland (of Cornwall).”

So Rawlinson understood what most scholars before him did not, that the Cassiterides were Wales and Cornwall, and not the Scilly Islands.

I am going to quote from a website which discusses the geology of the Scilly Islands and compares them to nearby Cornwall. The site is http://naturalhistoryofscilly.info and it says:

“Minerals in the granite

“The Scillonian granite you see now was a few kilometres underground when it solidified, a process which took millions of years. The chemical composition of the granite shows that it was formed from rocks that melted deep in the Earth’s crust. Whilst still molten, the cooling granite was stressed by Earth movements, leading to flow and alignment of early formed crystals in the granite. Similar movements after it had solidified, made cracks and joints. These cracks have since been exploited by weathering and erosion, forming the spectacular tors seen around the islands. In some places, minerals crystallised out from fluids injected into the cracks. Over much of Cornwall these fluids contained commercially valuable metals, such as tin and copper. The Scilly pluton is unusual as it seems to lack these metal ores, but it does have veins of white quartz and black fibrous tourmaline.”

There is no tin in the Scilly Islands. Yet even checking Wikipedia under the entry “Mining in Cornwall and Devon” one may see that there is plenty of tin in Cornwall, and evidence that is was mined throughout the second millennium BC.

In Book 4 of his Histories (4:152), Herodotus is writing about a period much earlier than his own, even predating the Trojan War, where he is discussing the settlement of various islands around Greece and elsewhere in the Mediterranean by the Phoenicians, and especially the island called Thera. Describing a certain voyage undertaken by a man called Corobius, Herodotus said, “The storm not abating, they were driven past the Pillars of Heracles, and at last, by some special guiding providence, reached Tartessus. This trading town was in those days a virgin port, unfrequented by the merchants.” The Trojan War was 200 years before King Solomon’s ships, so maybe Herodotus was correct. Surely Herodotus’ calling Tartessus a “trading town” illuminates the Scriptural record. In their Greek-English Lexicon, the learned Liddell & Scott readily identify Τάρτησσος as “the Tarshish of Scripture.”

Herodotus believed Thera to have been settled by Phoenicians not long before the Trojan War, and from geology we know that Thera had been completely destroyed in the middle of the second millennium BC by a massive volcanic explosion, the Minoan Eruption which had happened around the time of the Exodus. That eruption was as many as four times greater than the famous recent eruption at Krakatoa. The Phoenicians who settled it, therefore, must have found it empty, and they must also be those same people who were inhabiting the coast of Phoenicia at that same time, which were the Israelites of the Bible. The understanding of all of this begins with the Israelite conquest of Canaan, which included the conquest of Sidon and of Ushu, the building of Tyre a century-and-a-half before the Trojan War, and the ships of Tarshish of Kings Hiram and Solomon. Herodotus imagined Tartessus, or Tarshish, to be outside of the pillars of Heracles, which brings us to the Atlantic coast of Spain. Therein also lies the beginnings of the Phoenician settlement of Cornwall, Britain and Ireland.

Scientists find that tin found in Israel from 3,000 years ago comes from Cornwall

Tin ingots from more than 3,000 years ago found in Israel are actually from Cornwall, scientists have revealed.

The ingots, which date back to around 1,300BC, were also found at archaeological sites in Turkey and Greece.

But researchers from Heidelberg University in Germany revealed the ancient artefacts did not come from Central Asia, as previously assumed, but from tin deposits in Europe including sites in Cornwall.... 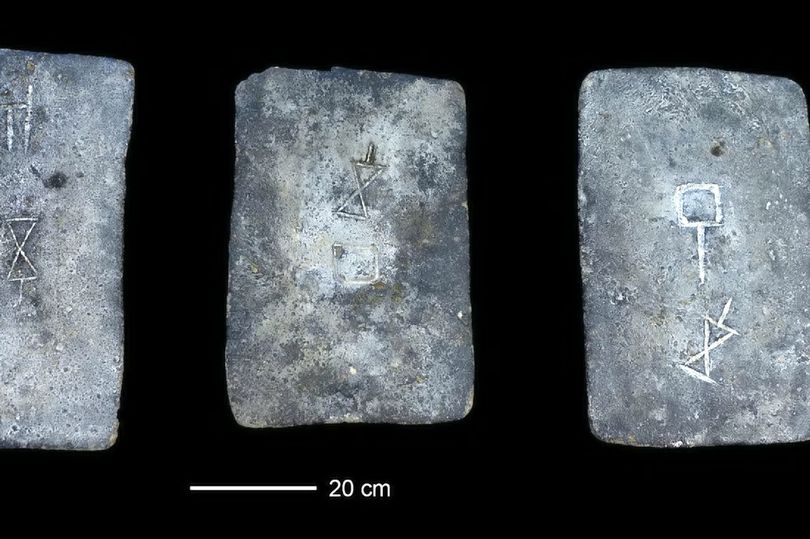