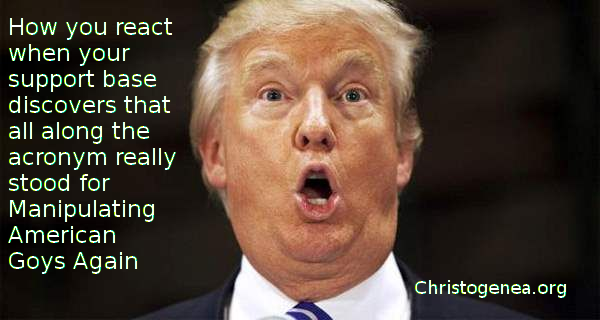 April 2018 End Times Update: the Trump Presidency and the futility of political solutions as a counter to Jewish Supremacism and Global Zionism, the Alt-Right Shills who promote Trump and deceive White Nationalists, the real reasons behind the war in Syria, and more.

See below for a link to a better amplified version of Wesley Clark's remarks at PNAC concerning the planned destabilization of the Middle East, which was a Neocon Jewish agenda from the beginning, once the names he names are considered.

Just over a year ago, last April 7th, I made a post at Christogenea thumping my chest just a little and listing a few of the comments I made about Donald Trump long before he was elected.

Then a few days later, on March 12th, 2016, I said in another podcast titled Christian Expectations that “Donald Trump might be good comedy, but that is all he is. He might be a little better than Hillary Clinton, but our feminized society deserves Hillary Clinton, the feminist hag. In the end, if Trump does win, he will leave White Nationalists looking either stupid or hopeless, and which one it is I cannot yet tell, but that would also serve our God because without Him, we are stupid and hopeless.”

Finally, on October 12th, 2016 in a podcast titled Political Devices, I said:
It is with very similar suspicions that we said over a year ago that Donald Trump exists only to make White Nationalists look stupid. Here we will qualify that remark. He will make White Nationalists look stupid if they place their hope for the future of White America in him, and they will deserve their fate. Donald Trump is no friend of Whites, as his record and the lives of his children prove doubly and triply.

But my intention was not to boast, and if I looked harder I might come up with similar statements which I had made at even earlier times. My intention was only to entice White Nationalists, as well as Identity Christians who still cling to a hope in the current political system, to consider the basic idea that we have no political solution, and that there are those of us who have known that there is no political solution for a long time now. While our statements were blunt, we were really only trying to encourage the rest of our semi-enlightened White brothers and sisters to come to that realization along with us.

So now, 15 months after his inauguration, do White Nationalists yet understand that there is no political solution to our woes? Or will they get caught up once again in the next seeming political maverick to come along, only to get the shaft once again when they find he too is just another establishment player.

Furthermore, NATO was declared obsolete but has now been fully resurrected, China is not a currency manipulator, Sanctuary cities are still well-funded, there is no Wall, Common Core lives, the budget is not balanced, Hillary is not in prison, the swamp is fuller than ever, and America is not being made great again, but of course, the Israelis and the Mexicans are. By the end of Trump’s first term, MAGA may stand for “Mexicans Are Great Again”, or perhaps even better, what it really stands for is “Manipulating American Goys Again”.

In every aspect, Donald Trump has sold out his Right and alt-Right support base, and has catered to his true masters, the Zionist and International Jews. It is tine that White Nationalists also took a long, hard look at the alt-Right figures who spent an incredible amount of their time and energy shilling for Trump throughout the entire election process, and some of them continue to shill for Trump.

This evening we have yet another End Times Update, and we will speak of the Trump Presidency and how it relates to future political prospects for White Christians in these last days.

Trump had promised to remove all undocumented immigrants as soon as he was elected.

The major promise on Immigration was made eight months later:

“Next, I will work with Congress to introduce the following broader legislative measures and fight for their passage within the first 100 days of my administration.… End Illegal Immigration Act. Fully funds the construction of a wall on our southern border — don’t worry about it, remember, I said Mexico’s paying for the wall — with the full understanding that the country of Mexico will be reimbursing the United States for the full cost of such a wall. Okay? We’re going to have the wall. Mexico’s going to pay for the wall.… But it establishes a two-year mandatory minimum federal prison sentence, this is people coming in illegally, for illegally reentering the United States after a previous deportation. And a five-year mandatory minimum for illegally reentering for those with felony convictions, multiple misdemeanor convictions, or two or more prior deportations.” [Gettysburg, PA, 10/22/16]

By May of 2017 Trump had softened his position on DACA and illegal immigrants in general.

In 2017, while there were more arrests of illegals within the country than any of the last there were fewer total removals of illegal aliens than in any year under Obama. So even Obama deported more illegals every year of his administration than Trump did in his first year. So Trump deported only 226,119, or a hair over 2% of his 11 million figure. Even worse, since more than that number of illegals are believed to have gained access into the country over the same period, the 11 million number is probably higher than it was when Trump took office.

Even recently in Tweets Trump showed how weak he is to defend the border:

Mexico has the absolute power not to let these large "Caravans" of people enter their country. They must stop them at their Northern Border, which they can do because their border laws work, not allow them to pass through into our country, which has no effective border laws.....

...Congress must immediately pass Border Legislation, use Nuclear Option if necessary, to stop the massive inflow of Drugs and People. Border Patrol Agents (and ICE) are GREAT, but the weak Dem laws don't allow them to do their job. Act now Congress, our country is being stolen!

Some apologists for Trump claim that there were fewer deportations in 2017 because of tighter border control. But on the other hand the news is that border crossings are up, and here we have Trump whining about the weaknesses protecting the border. So which is it?