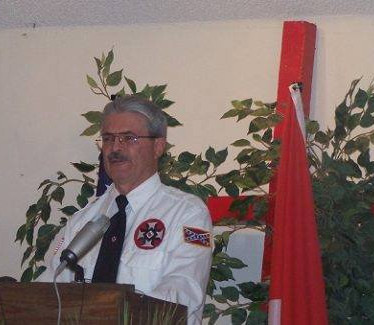 On Monday morning we received a phone call from his wife Debbi informing us that Mark Downey, a long-time friend and fellow Christian Identity pastor, had died in northern Kentucky. So Melissa and I are headed north once again, where we shall probably stay through the Sunday services at the Fellowship of God’s Covenant People. Mark had been diagnosed with late-stage cancer of the lungs about 6 months ago, and he and Debbi did everything they could to combat the disease. Mark fought a good fight, but with such a late discovery of the illness, it is evident that Yahweh God had different plans.

So tonight, as we visit with Debbi and attend whatever services are planned for Mark, we decided to offer a memorial for him by broadcasting his final sermons, a two-part series titled Eyes That See, which were delivered at the Fellowship of God’s Covenant People on November 2nd and 19th of 2017. In the second part, which is much shorter than the first, it sadly becomes evident that Mark has already begun to lose his voice, a condition which was caused by his illness. However his completion of the sermon is nevertheless a testament to his character and fortitude.

We chose to broadcast these sermons for one other reason. Mark and I were good friends, but our friendship was rather unique in Christian Identity circles. Mark would never understand the events of Genesis chapter 3 or Revelation chapter 12 in the same manner which we understand them, even in spite of the fact that we had discussed these Scriptures many times over the years. For nine years now, which is the approximate time that I knew him personally, I always thought that perhaps I could persuade him with one more conversation, but it never happened. And even with that, I cannot hold any grudge against him. We rather admire his steadfastness.

So the first part of this set of sermons elucidates the fact that Mark indeed remained steadfast in his differences right to the end. And where he mentions Genesis chapter 3 and Revelation chapter 12, we do not agree with him, but we are not afraid to let him express his opinion. However in the final part of the short series Mark touches on many areas where we were indeed in agreement concerning race, salvation and Scripture, and sin and the consequences of sin.

Our friendship began with the mutual understanding that from a practical and contemporary viewpoint, our agreements were far more important than our disagreements, and while we had many discussions, we never argued or let our differences interfere with our Christian and brotherly love for one another. It is my opinion, that this was also Pastor Don Elmore’s experience with Mark, as Don invited Mark to be his associate pastor at the Fellowship of God’s Covenant People in spite of having these same differences, and they also remained friends and fellow-workers right to the end.

With this, we shall present both parts of Eyes That See, by Pastor Mark Downey.