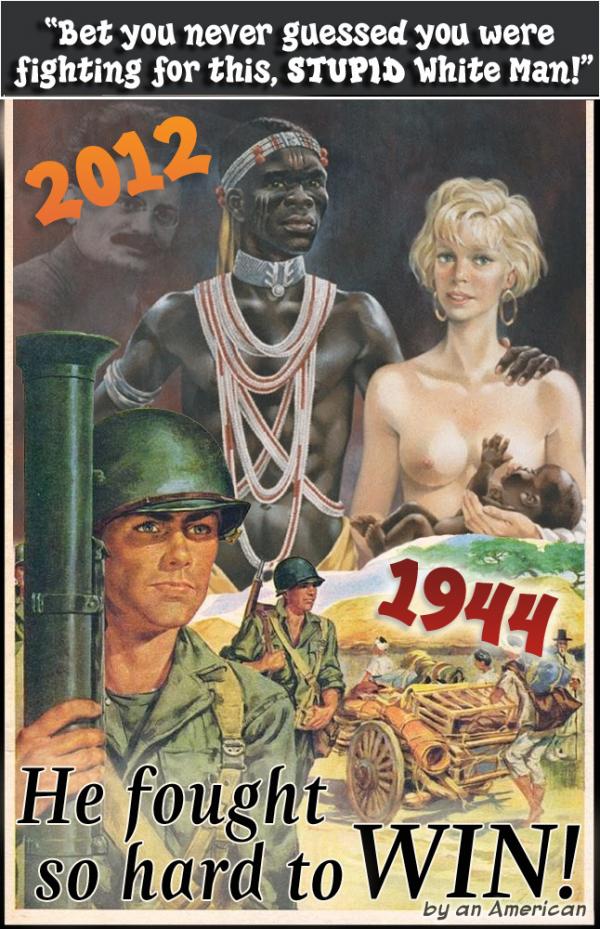 Adolf Hitler was not a Christian Identist. Like most Nationalists do even today, he also took it for granted that the Old Testament was a jewish book, and often pointed out those qualities in it which seemed to be jewish. Yet Hitler was a Christian, and Hitler understood that Christ was an Aryan if for no other reason than the fact that His very nature was so contrary to the nature of the jews, and so much like the nature of the Aryan. Hitler was not, however, a Judeo-Christian, and while he expressed the importance of the major sects of Christianity in providing a moral foundation for the people of the nation, he really had no care for the clerics, and often pointed out their faults. The major fault Hitler had with the clerics was their missionary work to non-Aryans, as they let Aryans slip into immorality. Hitler certainly understood and insisted that in order to have a healthy folk, it must be a moral folk. Like Hitler, Christian Identists also reject the professional clerics and their missionary activities to alien tribes.

Hitler stood against Globalism. He saw Globalism as a vehicle of both jewish Capitalism and jewish Marxism, and understood correctly that all of these were different arms of the same beast. He understood that the Jew, an international creature, sought to subvert every nation, and was effective at that subversion through the command which he had of international finance. He also understood that the Jew is the destroyer of the integrity of all creation, and especially of our race.

Adolf Hitler was trying to free his nation from the slavery of jewish usury, and Christian Identists would love to see the world freed of jewish usury. Hitler's Fascism was the first and only nationwide and democratically elected anti-jewish-banker movement in modern times.

Many so-called Christian Identity adherents, still mired in the nonsense peddled by the jewish press and academia, are ashamed of Hitler and National Socialism, or even reject it as evil. The sad truth is that Hitler was clearly fighting our fight, and had many of the same beliefs which we do. Christians who disparage National Socialism simply do not understand it, because they have accepted all of the jewish lies about it.

On the other hand, many Nationalists and National Socialists disparage Christianity, and mostly because they accept all of the jewish tales about the Bible. But the Bible was originally an Aryan book, and is indeed the foundation upon which our civilization was originally built. Classical Greek and Roman civilization can find its ultimate roots in both Mesopotamia and in the Hebrew Bible. Christianity is an Aryan religion, and it is not an error that so many Germanic tribes of the first Christian millennium so readily accepted it.

Hitler is quoted, on p. 142-143 of Murphy's Mein Kampf, as having said that "The sin against blood and race is the hereditary sin in this world and it brings disaster on every nation that commits it." Christian Identists also hold to this very same belief.

Christian Identists understand that it is a waste of time attempting to share Christian promises and ideals, along with Western civility, with the non-White races. All of this we have in common with Adolf Hitler.

Both Christianity and White Nationalism can find common ground, but only in Christian Identity. And while this is not the primary topic of our discussion tonight, it had to be said.

Tonight, we decided to get together and discuss Adolf Hitler, for his 123rd birthday, which was yesterday, and hope to dispel some of the myths about him which even Christian Identists repeat. So we greet Carolyn Yeager, Sword Brethren and Severus, and surely this may be an interesting evening.