The Alt-Right, Jews and Sodomites

This evening Dasho joins us to discuss the degree of influence which Jews and Sodomites have in the so-called Alt-Right, or “Alternative Right”. He would have titled the program: The Gay Mafia is Real.

The ultimate conclusion was offered by Dasho, but made by others elsewhere before him, that the leaders of the so-called Alt-Right are only a gang of racist Liberals. They are godless secularists who embrace the entire Liberal agenda, except on the issue of race.

At Christogenea, we have been disparaging the Alt-Right for a long time. We feel it is our obligation, whenever we get an opportunity, to warn our fellow Identity Christians and Christian Nationalists that dissident right-wing political or social voices are not always what they seem to be, and that quite often, they are even traps.

They entice people into following them through appealing books and articles on subjects of common interest, such as the popular American Renaissance books, The Color of Crime by Edwin Rubenstein or Why Race Matters by Michael Levin. Both of those books were actually written by Jews, and Jared Taylor has defended Jews consistently throughout the entire history of his tenure at American Renaissance, or AmRen, as it is called. But a 2005 PDF copy of The Color of Crime did not bear the name of its Jewish author, whereas an updated 2016 edition boldly displays his name on its front cover. Perhaps over the course of those 11 years, Taylor has become more open about the fact that his organization supports, and is evidently supported by Jews. 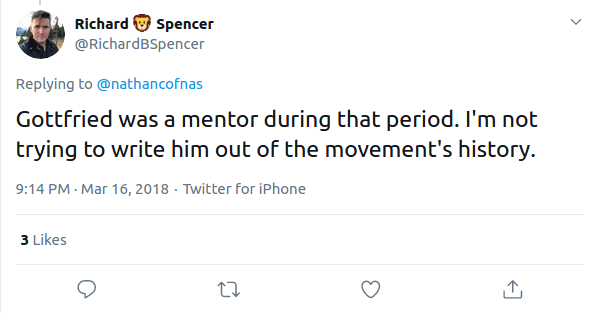 An early Richard Spencer mentor is Paul Gottfried, who is credited with supposedly coining the terms "alt-right" and “paleoconservative”. Gottfried is also a Jew, and has had much influence on Spencer, especially in his early years. Edwin Rubenstein is also a current and regular contributor to another supposedly White Nationalist website, VDARE.com, and Paul Gottfried had also contributed a handful of articles to that site each year through 2019. Michael Levin, the Jew who wrote Why Race Matters, is also promoted by VDARE.

But as always, with Jews come Sodomites. The Jews, the most notable of the descendants of the ancient Canaanites, were the original producers of Sodom and Gomorrah, and of course their proclivities for perversion have not changed over the course of time. So today we are going to talk about another group which is quite prominent in Alt-Right circles, a group which has already been labelled as Greg Johnson’s Gay Mafia. Johnson is the publisher of the website Counter-Currents.com and has written books that appeal to White Nationalists, which have titles such as White Identity Politics and The White Nationalist Manifesto.

Jared Taylor is billed on RationalWiki and elsewhere as the “Intellectual Godfather” of the Alt-Right. His own website, amren.com, bills itself as “America's foremost white advocacy publication.” In reality, it is a haven for Jews and Sodomites and all those who tolerate them. Evidently, Taylor thinks far too highly of himself. But he appears with the Sodomite Greg Johnson at Alt-Right events and in certain nationalist forums quite often, even in diverse places in Europe. Taylor, Spencer, Johnson and others all constantly promote and support one another, and that in turn helps to lead and contain nationalist-minded Whites in their own rabbit-hole. In addition to this, other influential and supposedly right-wing websites, for examples Kevin MacDonald’s Occidental Observer and the Jewish-run breitbart.com, frequently mention Taylor, Johnson, Spencer and Donovan as leading White nationalists, thereby ensuring that inquiring Whites are corralled into Alt-Right circles that are really safe havens for Jews and faggots.

But I don’t know if Johnson was the original Alt-Right Sodomite, because Richard Spencer was literally shacked up with another Sodomite, named Jack Donovan, for many years. Donovan has also been promoted by Amren, where he is billed as a “tribalist and masculinist”. But Johnson, who operates the website countercurrents.com, is considered to be the leading intellectual , or really pseudo-intellectual, Alt-Right Sodomite today, and he certainly does seem to be the enforcer for maintaining a positive public attitude towards the so-called “gay community” among Alt-Right figures and followers.

Aside from these and the obvious Sodomites, like Milo Yiannopolis, The Alt-Right figure who calls himself Millennial Woes is also an professed Sodomite. Millennial Woes gained popularity on Youtube, and he was then promoted among the Alt-Right by Richard Spencer, Jared Taylor and Greg Johnson. He is often featured at AmRen, Counter Currents and VDARE, and he was also featured on Mike Enoch’s The Right Stuff and at Spencer’s National Policy Institute.

But the truth is, that White Nationalists are never going to have any success so long as they embrace devils, or the sins which are promoted by devils. The only solution to be found is in a return to our God and His Word. When we support these other groups, when we frequent their events, when we promote their articles or share their websites, we are supporting their sins. So I call all of these supposedly intellectual clowns “pseudo-intellectuals” because unless you are an Identity Christian, all of your intellectual pursuits are in vain. Until we realize the importance of the laws of Yahweh God and how keeping His commandments is the only way to uphold a healthy White society, we will never agree on anything and we will never have any success as a race.

Here once again we have our friend Dasho with us, who will discuss and help to quantify all of these interlocking Alt-Right relationships, and how Greg Johnson imposes and enforces his own code of ethics among these other secular so-called White Nationalists.

What follows are some of our talking points:

Musonius Rufus defending TRS for it embrace of degenerates. Seventh Son quoted as having said “TRS had a lot of homosexuals at the start”, implying they were gone while Ghoul and Greg Johnson were still there.

In his 2016 article Gay Panic on the Alt Right, Johnson made the claim that “there is no point worrying about homosexual entryism, because they are already inside. When I first arrived on the White Nationalist scene in the year 2000, it was apparent that a number of discreet and open homosexuals like Martin Webster were already well-ensconced.” But Johnson neglected to mention that British so-called “neo-nazi” Martin Webster felt the need to retire from Nationalist politics after mere rumors of his sodomite tendencies had surfaced in the mid-1980’s. Then, in 1999, Webster apparently emerged once again to claim that he had a sodomite affair for four years with Nick Griffin, who at the time was the newly elected leader of the British Nationalist Party. So apparently Webster only came back into public life hoping to discredit Griffin, making claims which Griffin denied, and Johnson uses the slanderer to legitimize his own participation in right-wing politics. Lately, Martin Webster writes articles for The Occidental Observer and has appeared often at Johnson’s Counter Currents website, in articles and podcasts.

James O’Meara This Gay Old House, another writer for Counter Currents who is a Sodomite.

Harold Covington and his relationship with Greg Johnson, before Covington denounced sodomites.

Worked together until in 2010 Covington came out as anti-homosexual. Suspected that Greg Johnson planted rumors of Covington being a federal agent.

Greg Johnson presuming to collect resumes for positions in Trump administration. Other ways, through Forum attendance, etc., Johnson collects names and information about individuals, and threatens to dox them if they speak about against him.

Greg Johnson, Jared Taylor speak together at the same venues in Europe. Traveling, Johnson in Europe always seen in company of 18-25 year-old males. Johnson advocates the disavowal of people who use the term "sodomites".

Alt-Right figures accept Johnson claiming he has "done a lot of good for the movement", while in fact Johnson is only keeping racial politics safe for sodomites.

Is Ramzpaul no longer featured on AmRen because of his having denounced Sodomites?

Ghoul from TRS and a co-host on Mike Enoch’s program The Daily Shoah was not only openly labelled a sodomite by former TRS podcasters, but also was accused of grooming and having sex with at least one under-aged boy named Andy, all while posing as a vehement anti-degenerate. He was also found to have been in a relationship with a Jewish transsexual.

Ghoul & Greg Johnson, Ghoul an open sodomite while doing The Daily Shoah with Mike Enoch. Greg Johnson promoted by The Right Stuff, and it was defended so long as he “keeps it on the down low”, a prison turn used by negroes to describe closet sodomy. Open and favorable talk of sodomizing in TRS inner circles, and those who opposed it were removed.

The following links provide documentation for many of the statements made here this evening: 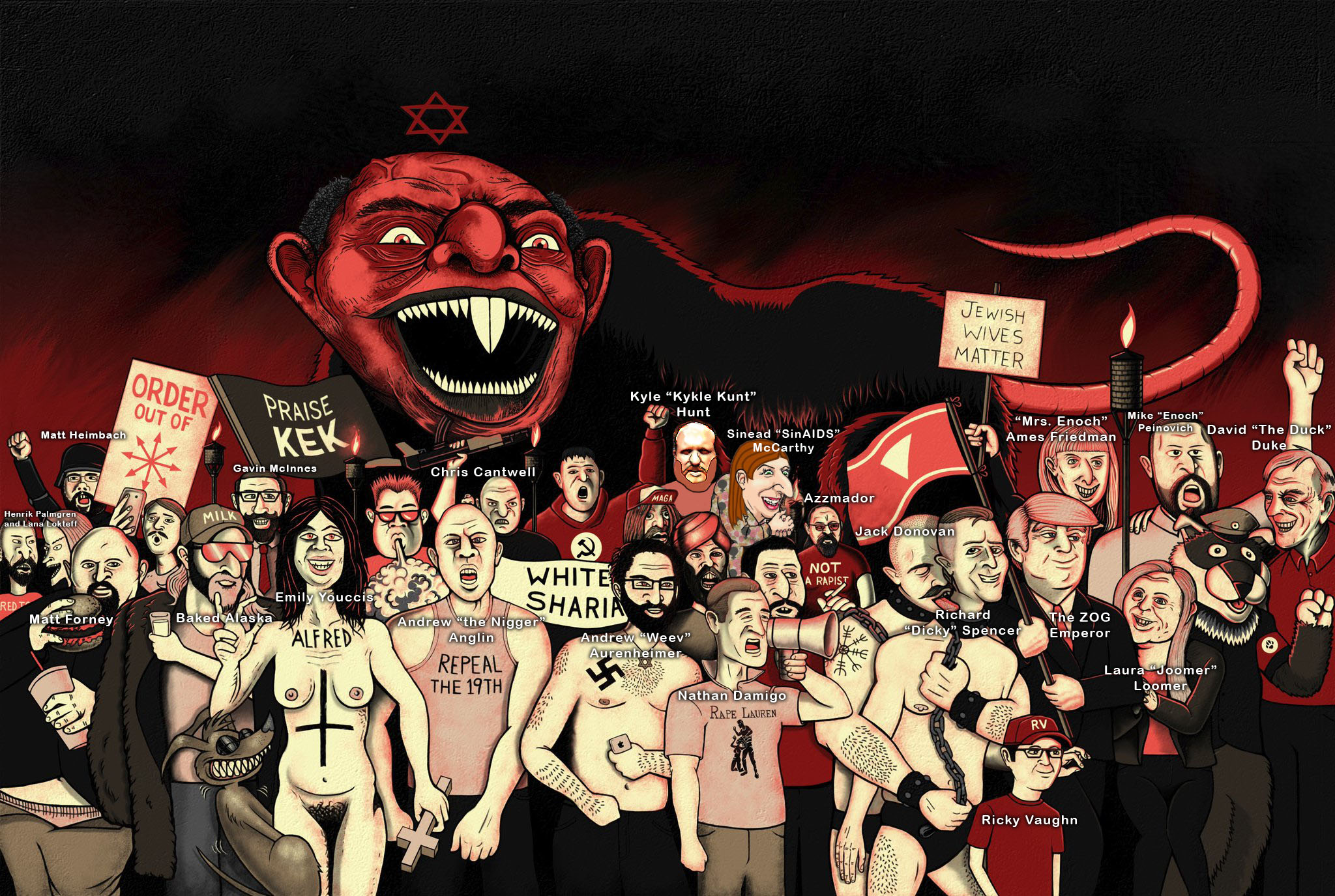